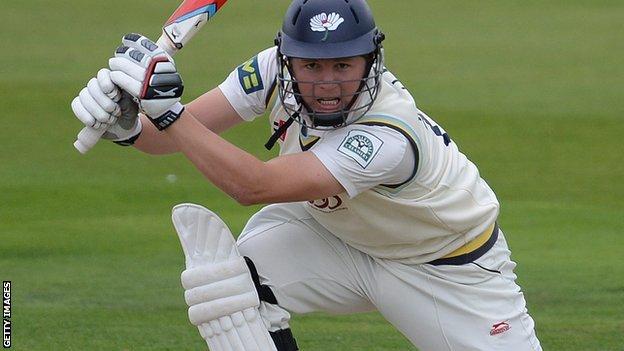 England have given Yorkshire batsman Gary Ballance a surprise call-up to their Ashes squad to tour Australia this winter.

The 23-year-old left-hander, who was born in Zimbabwe, is uncapped at Test level and has played a solitary one-day international for England.

Jonny Bairstow, as well as battling to reclaim the number six spot, will also act as back-up wicketkeeper to vice-captain Matt Prior.

However, seamers Tim Bresnan and Graham Onions miss out on the 17-man squad, along with spinner James Tredwell and opener Nick Compton.

Bresnan is currently sidelined with a stress fracture in his back.

"Gary Ballance will put pressure on Jonny Bairstow - if he scores runs in the warm-up matches and Bairstow doesn't, that will make things interesting for the selectors. While Bairstow is favourite to start the first Test, he is yet to find that big score which will nail down his spot in the batting order."

"He will travel to Australia with the squad to maximise his rehab opportunities with the medical team and coaches who will monitor his progress," said national selector Geoff Miller.

The Ashes series down under begins in Brisbane on 21 November, with the fifth and final Test starting in Sydney on 2 January.

Despite their lack of experience at Test level, Rankin, 29, and Stokes, 22, both impressed for England in the recent ODI series defeat by Australia.

The height of Rankin and Tremlett also appears to have worked in their favour, with Australian pitches traditionally offering more bounce than English.

"It's one step closer to my dream of playing Test match cricket," Rankin, 29, told BBC Radio 5 live. "I'm over the moon that I have got into the squad.

"I've always had the ambition to play Test match cricket but I think it was that step when I did decide to stop for Ireland. I wanted to concentrate on playing for Warwickshire and force my way in.

"Hopefully, the extra pace and bounce will work well for me. It is going to be tough but I am looking forward to the challenge."

Panesar, who made the last of his 48 Test appearances in March, has got the nod ahead of Tredwell as reserve spinner behind first-choice Graeme Swann.

He has earned a call-up despite his recent indiscretions at a nightclub in August. He then left Sussex to join Essex on loan.

"He's appreciated he's made errors and he's very sure that those errors are behind him now," explained Miller. "He's been selected because that's been rectified.

"He's an experienced international player and it's up to him to actually produce the goods for us. He's very prepared to let his bowling do the talking for him, so I'm prepared to accept that."

Ballance, who made a duck on his ODI debut against Ireland in September, averages 52.17 after 64 first-class matches.

Ballance is hoping his experience his progression through England's performance programme and the second-string Lions side helps him adapt to the step up.

"I wasn't expecting it and I was surprised when I got the call," he said.

"It will be an honour to represent England at the highest level and it will be extra special in an Ashes series."

"Being involved with the England performance programme and the England Lions has been beneficial.

"It gets you immersed in the way England prepares. Having toured Australia with the Lions earlier in the year, I learnt a lot about international cricket and the way the game is played out there."

Miller added that picking Durham's Stokes, who was sent home from last winter's England Lions tour of Australia for disciplinary reasons, was about keeping one eye on the future.

"You obviously pick players to win the series, but we have to think about the future as well, the immediate future and a bit further on," said Miller.

"He's proved over the last year or so that he's developing his game rapidly. He's an exciting prospect.

"He comes into the squad to feel the atmosphere and we know he's capable of doing a job for us in the all-rounder position."

England have also named a 16-strong performance squad, which will fly to Australia on 14 November and act as back-up to the main party, playing three-day matches in Brisbane and Perth as well as undertaking training and conditioning work.

Miller added: "The England Performance Programme provides an excellent opportunity for those players identified as having considerable talent to train together in an England environment throughout the winter and further develop as cricketers and this is an exciting young squad who have impressed in domestic cricket recently.

"Ballance, Rankin and Stokes have all come through the EPP in recent years and have put in strong performances for their counties and England teams to earn an opportunity to step into the Test environment."

There are three players with limited-overs international experience in the performance squad - spinners Danny Briggs, wicketkeeper Jos Buttler and paceman Chris Jordan - along with spinner Simon Kerrigan, who played a solitary Test in this summer's Ashes.