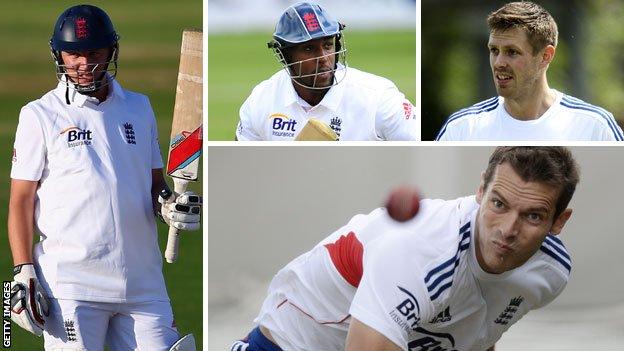 England's squad for this winter's Ashes series down under is pretty much as expected, but there are two or three interesting selections - in particular the inclusion of Yorkshire batsman Gary Ballance.

It suggests the selectors still have an eye on that number six spot because while Jonny Bairstow is favourite to start in the first Test in Brisbane on 21 November, he is yet to find that big score which will nail down his spot in the batting order.

Ballance deserves his call, he is clearly a good player. He averages more than 50 in first-class cricket and scored a hundred for the Lions against Australia this summer.

Performing well for the Lions is one route into this England team, with another being consistent performances in county cricket over a long period.

Michael Carberry was probably competing with Somerset's Nick Compton as cover for skipper Alastair Cook and Joe Root, but he has been given the nod - and much of that will be down to his sterling service in the domestic game for Hampshire.

However, a lot of people have sympathy for Compton because he has not done very much wrong. He will rightly feel disappointed not to be on that plane to Australia.

Meanwhile, England have clearly gone for the big, tall fast bowlers in their touring squad. We're expecting quick, bouncy pitches and quite a hostile series with some rancour and ill-feeling carried over from the summer.

Boyd Rankin showed what he could do in his one-day performances against Australia at the end of this summer, and I think he's probably ahead of Steven Finn and Chris Tremlett in the pecking order at the moment.

Finn has had a disappointing summer and some people might consider Tremlett fortunate to be there, so Rankin has a great chance of playing in the first Test match.

England are hoping Tremlett can rediscover his venom from the last tour to Australia when he came in and bowled with a lot of pace.

Has Tremlett still got it? I didn't see him bowl for Surrey towards the end of the season but I did hear some pretty mixed reviews.

It's nice to see Ben Stokes getting a chance because he is going to be a good cricketer. He bats genuinely and has a bit of pace with the ball - more than Chris Woakes, who has not been picked after making his debut in the final Test of this summer's series.

Perhaps the biggest decision was whether to take Monty Panesar as the second spinner. Are England going to be able to manage him and help him following his off-field problems? This is not just an issue from last summer, there have been issues in the background for a little while now.

It's an opportunity for Monty to get himself back on the straight and narrow, and for England to help him do it.

I think Lancashire's Simon Kerrigan played in that fifth Test at The Oval because they didn't want to select Monty. Poor old Kerrigan then had a nightmare but at least he is in the performance squad this winter.

Similarly with the fast bowlers - if Finn starts well, you imagine he will be that third seamer. If he doesn't, you can see Rankin getting a chance to make his Test debut.

It's going to be an aggressive series so England want to go in with their big guns firing.