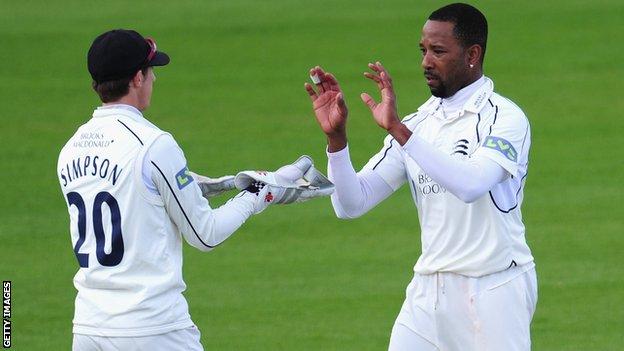 Seam bowler Corey Collymore was thrilled to receive a guard of honour on his final Middlesex appearance.

The 35-year-old is leaving Lord's after three seasons following the county's decision not to offer him a new deal.

He told BBC London 94.9: "It's been a good three years and it was a nice gesture from the boys. It's good to see people appreciate your efforts.

"Middlesex have lots of good players but I guess people move on and these things happen in cricket."

No-one knows what the future holds. I think I have still got a couple of years left in me

The former West Indies fast bowler took 86 wickets in 33 first-class appearances for Middlesex and picked up 25 County Championship wickets at an average of 24.52 this season.

"I've been bowling well this season," he said. "My second season didn't go that well due to off-the-field incidents - one of my daughters was ill and one of my best friends died in a car crash.

"These things happen but I was happy with my efforts this season."

Collymore has not set about securing a new club as yet and is remaining calm on his future.

"No-one knows what the future holds," he said. "I think I have still got a couple of years left in me. I am not talking to anyone at the moment.

"I just want to relax for a few weeks. I have stuff to do with family first and then I will think about cricket after that.

"The last three winters I have gone to Australia. That is pretty much still on the cards but after Christmas. I'll take it from there."