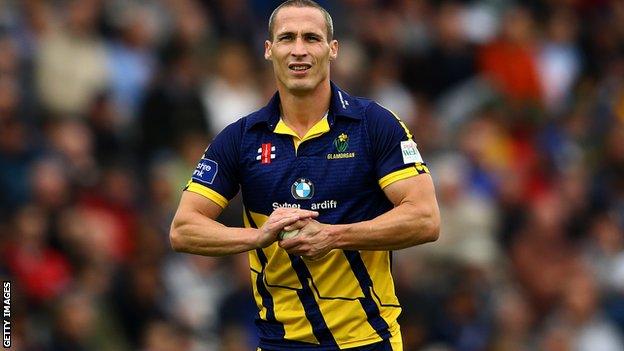 Bowler Simon Jones will discuss his future with Glamorgan, but is prepared to travel to keep playing.

The former England bowler announced his plans to retire from first-class cricket before Glamorgan's YB40 final defeat to Nottinghamshire at Lord's.

Jones, 34, has quit List A cricket and is now looking for a Twenty20 deal.

"I have a meeting with Hugh Morris this week and hopefully I can stay at Glamorgan and play Twenty20," said Jones.

"If not, I will have to look elsewhere and give it my best shot."

Jones plans to meet Glamorgan's new chief executive and managing director Morris to see if he has any playing future with the Welsh county.

He has made no secret of his desire to stay and sign a new contract with Glamorgan, but would travel anywhere in the world to keep playing.

"Basically [I'm] looking at the Big Bash [in Australia] and the IPL [Indian Premier League], but they usually target international players....you never say never and I will put my name in the hat and see how it goes," Jones has told the BBC Radio Wales Sport show.

"There are plenty of opportunities on the road with the West Indian one, the Bangladeshi IPL and there is an IPL in New Zealand and one in Australia, the Big Bash, so there is plenty of options."

Glamorgan were soundly beaten by Nottinghamshire by 87 runs at Lord's on Saturday.

Jones' bowling figures were two wickets for 36 runs and at the end of his eight-over spell he received a standing ovation from the Lord's crowd.

"It was the best experience of my life," said Jones

"To have the neutrals, the Notts fans and especially the Glamorgan fans clap and stand like that for a couple of minutes was very emotional, but I held it together thankfully.

"It will go down in my memory forever and it was a great send off."