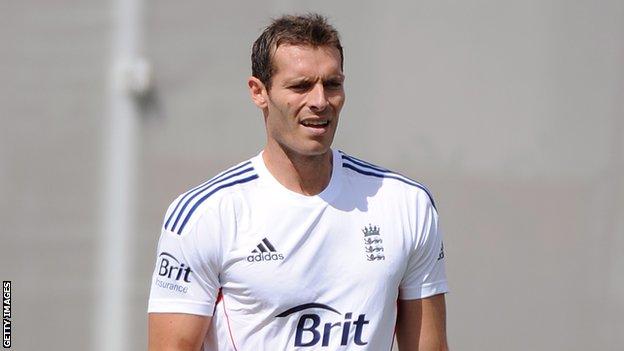 Surrey fast bowler Chris Tremlett says being named in the Ashes squad to tour Australia this winter has given him a major boost after his injury problems.

The 32-year-old, who last played a Test match in January last year, was forced to miss most of the 2012 season.

He told BBC London 94.9: "People don't really have any idea how hard it has been to get back.

"I guess the mental trauma is something I have had to deal with but it is great to get through that."

Tremlett, who has taken 49 wickets at an average of 26.75 in 11 Test matches, was sidelined following back surgery in February 2012 and then had to have knee surgery a year ago to repair torn cartilage.

However, he has featured regularly for Surrey in their County Championship campaign this season, taking 32 wickets in 11 appearances.

"To get back bowling has taken time," he added.

"Even at the start of the season I wasn't really at my best and it took a couple of months to find my feet again.

"In the last couple of months I feel I am bowling as well as I was a couple of years ago.

"I still feel I have got some left in the tank to find that form when I was playing for England."

Tremlett was named in the England squad for the final three Ashes Tests against Australia this summer but did not make the XI at Old Trafford, Durham or The Oval.

"To get the call from Andy Flower in the summer to train with the team at Lord's and be involved and around those guys automatically gave me a massive confidence boost," he said.

"I didn't feel out of place going back to that team. It's great to get the call, especially after such a bad couple of years with injury.

"I was in the squad for the last Test match in England so was obviously hoping I would get the phone call [for Australia]. But until it rings, you never know."

The former Hampshire man established himself as a Test regular on the tour of Australia in 2010-11, taking 17 wickets as England triumphed down under for the first time in 24 years.

He hopes that experience will stand him in good stead as he targets a return to the side.

"I am certainly confident going to Australia with the experience I have got," Tremlett said.

"Not having played Test cricket for a couple of years now, knowing how how to bowl on those wickets will definitely help the team and the squad.

"There is always competition for places and I have had to work extremely hard to get back in the reckoning.

"Staying fit for Surrey has been my goal this year and my next goal is to force my way into the [England] team like I did two years ago.

"I know it won't be easy so it is about a lot of hard work in the nets and practise games."