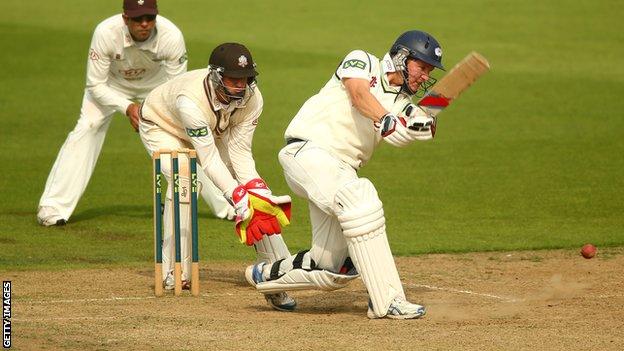 Surrey hit back to close on 172-1 after Gary Ballance scored a season's best 148 to guide Yorkshire to 434.

The Tykes began on 316-6 and once Adil Rashid fell for 43, Ballance reached his century before hitting seven fours and a six as he farmed the strike.

In reply, Surrey openers Rory Burns and Dom Sibley both passed 50 in an opening stand of 171 which was finally broken in the day's penultimate over.

Burns edged Steven Patterson behind for 82, leaving teenager Sibley on 81.

The 18-year-old was playing only the third first-class match of his career and batted with impressive composure given that his previous three innings had resulted in a best score of just 12.

His stand with Burns - who for most of the season has been partnered by Arun Harinath - was Surrey's best opening partnership of the season in four-day cricket.

"Gary Ballance made a majestic 148 but the Surrey opening pair were excellent in reply.

"Sibley moved to his maiden first-class 50 with a six and it looked as if both openers would be there on the third morning before Steven Patterson struck."