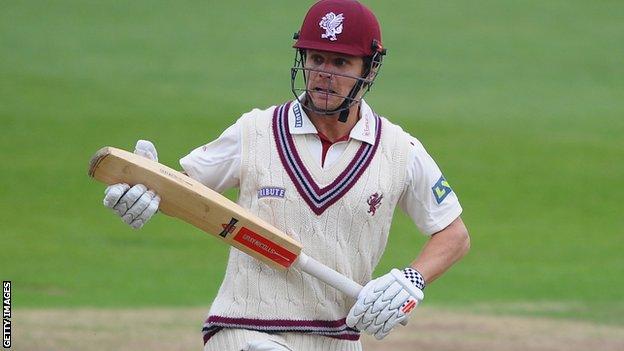 James Hildreth hit his second century of the summer as Somerset made a positive reply to a Notts total of 406 all out on day two at Trent Bridge.

The home side only added 28 to their overnight 378-7 after the morning session was lost to the weather.

And there was good news for both sides as Derbyshire's struggles in their game eased their relegation fears.

Derbyshire need to beat Warwickshire with maximum points to have any chance of escaping from the bottom two and sending Notts or Somerset down instead.

Following the belated start because of fog and rain, Somerset only took 8.5 overs to clean up the home side's tail as seam bowler Alfonso Thomas took 4-103.

But skipper Marcus Trescothick's unhappy season continued when, batting under floodlights, he was dismissed lbw for two to left-arm paceman Harry Gurney.

Luke Fletcher then had Chris Jones caught behind, but Hildreth and Compton steadied the innings before raising the tempo, with each of them hitting three boundaries in an over immediately before tea.

Hildreth's century duly arrived off 108 balls with a six and 17 fours but the umpires decided the light was no longer good enough at the end of the same over.

"With first division survival at stake, both counties have found the necessary quality to deliver performances that matter.

"On the opening day David Hussey and Michael Lumb put together a stand of huge significance and another experienced pair, James Hildreth and Nick Compton, have matched their efforts.

"Without any collusion, or any assistance from events at Derby, both Notts and Somerset have shown their top-flight pedigree."