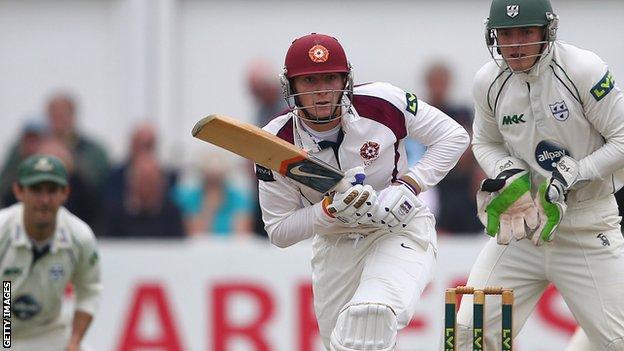 Northants won promotion to Division One of the County Championship despite falling short of their bonus points target against Worcestershire.

They were all out for 202 on the second day at New Road, earning only one of the two batting points they needed.

However, promotion was guaranteed when Essex failed to take maximum batting points against Hampshire.

It's the most surreal feeling I've ever had in a cricket game. All we wanted to do was to go off and have a beer, but realised we've got to carry on

It has been a highly successful season for Northants, who won the FLt20 for the first time by beating Surrey in the final at Edgbaston last month.

And the club have announced plans for an open-top bus parade and civic reception on Friday.

"It's the most surreal feeling I've ever had in a cricket game. All we wanted to do was to go off and have a beer, but realised we've got to carry on.

"We can't celebrate too hard because we've still got a game to win, but it's an amazing feeling."

Northants resumed on 103-4, with their sights set on reaching 250 in order to go up without having to concern themselves with events in Southampton.

But three wickets in the first hour by Worcestershire seamer Alan Richardson checked their progress and it took a stand of 45 between Keogh and David Murphy to see them past 200, before a mix-up led to Keogh being run out for 57.

Murphy followed when he top-edged an attempted reverse sweep off Moeen Ali (3-30), leaving Richardson with figures of 5-70, his fifth five-wicket haul of the season and 23rd of his career.

Worcestershire knocked off the 39-run deficit before the tea interval, and Daryl Mitchell (47) and Matt Pardoe (38) shared an opening stand of 77.

Northants recovered to pick up three wickets, but they will not want to chase too big a target in the fourth innings and run the risk of following the joy of promotion with a season-ending defeat.

"The news came though from the south coast at just after 4.15 that Essex had been dismissed, the slip cordon embraced and a ripple of applause broke out from a sporting Worcestershire crowd to signal that Northants had done it.

"Many observers will say it is the finest year in the history of Northamptonshire, and a club utterly revitalised from top to bottom has shown what is possible with low resources in a story to gladden the heart of any cricket romantic.

"If recruitment is as sharp as it has been in 2013, who knows how green Northamptonshire's fields will be in 2014?"

"Northants' promotion was a little anti-climatic as it was decided by events elsewhere, but that will not detract from the achievement, earned over a hard six months, not in the last game of the season.

"However, there is much still to play for and professional pride means they will want to end the season with a win.

"If Worcestershire can post a decent target, the evergreen Richardson will once again be a test for them, and we could yet see a thrilling end to the summer at New Road."