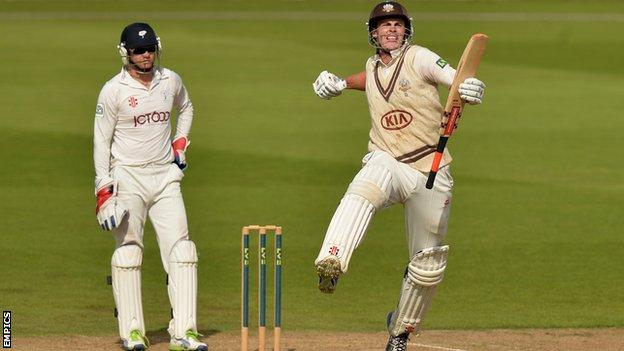 Surrey's Dominic Sibley became the youngest player to hit a double century in the County Championship on day three against Yorkshire at The Oval.

Sibley, aged 18 years and 21 days, finished 220 not out, becoming Surrey's youngest centurion and second-youngest to score a first-class ton in England.

The Whitgift School A-level student, who had been given permission to miss four days of studying in order to play for Surrey, shared a 236-run stand with South African Hashim Amla, who made 151.

Sibley, an England Under-19 international, added: "I didn't have many chances to score in the morning because Yorkshire bowled really tight.

"Speaking with my mum, I told her how desperate I was to bat with Hashim Amla before he left Surrey.

"I could not have wished for a better partner because with him there I could just play my own game."

Sibley, who played for Surrey's second XI at the age of 15, faced 505 balls and spent almost 10 hours at the crease, a stay that first saw him sweep Adil Rashid for four to reach three figures.

In doing so, he became Surrey's youngest centurion, beating the record of Jack Crawford, who was aged 18 years and 257 days when he scored 119 not out against Derbyshire in 1905.

After being dropped off Ryan Sidebottom when on 159, Sibley advanced down the wicket to lift the ball over mid-wicket for four to bring up his double century.

In passing 200, Sibley eclipsed the mark of David Sales, who hit a Championship double ton on his first-class debut for Northamptonshire aged 18 and 237 days.

The only player to have scored a double hundred in English first-class cricketer at a younger age than Sibley is the legendary WG Grace.

Sibley later tweeted: "Got no words to describe that. Best day of my life no doubt, special in the dressing room after. Dream come true having a 200 partnership with Hashim Amla.

"Thanks everyone for all your messages, nice to get my name in the history books! Hopefully back tomorrow for some more."