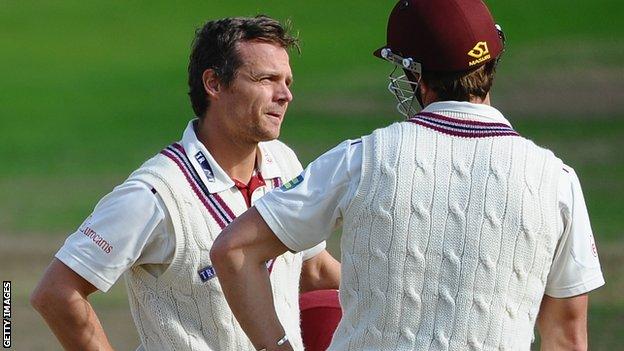 Somerset batsman James Hildreth struck a fine 161 to hold up Nottinghamshire's victory charge on the third day at Trent Bridge.

However, with Derbyshire's defeat by Warwickshire earlier in the day guaranteeing the safety of Somerset and Notts, the game became a dead rubber.

The hosts will now be hoping for more quick runs on the final morning to set up a final-innings run chase, although both sides may run out of time as they attempt to secure a positive result.

Earlier in the day, the match had looked to be heading for a certain draw as Hildreth, whose innings spanned 227 deliveries and included 26 fours and one six, and Compton continued to frustrate Notts.

But, once the latter fell to Luke Fletcher (2-79), Somerset lost regular wickets and only Lewis Gregory's unbeaten 40 made absolutely sure of a fourth batting point.

Mullaney and Riki Wessels (20) got Notts' reply off to a flier, sharing 79 for the first wicket in only 12 overs.

But Mullaney fell to Peter Trego (2-27) and with his dismissal the runs slowed and Notts now face an important first hour on Friday morning if they are to keep hopes of a victory alive.

"Nottinghamshire's bold approach at the end of the day should at least ensure an entertaining conclusion to the season.

"Already safe, the home side turned their attention to securing a win that would see them go above Somerset into sixth spot in the table.

"Small pickings maybe, but sixth is better than seventh and would at least break the run of 11 matches without a win."