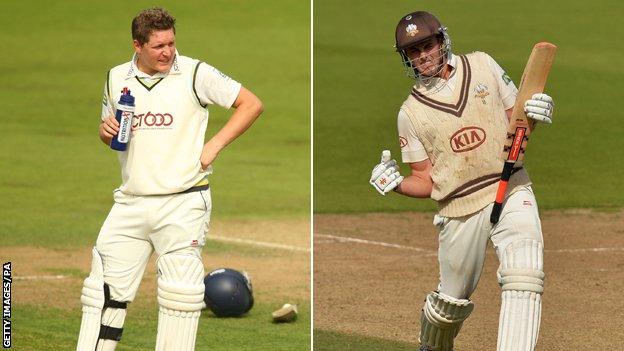 Gary Ballance's second ton of the game secured a draw for Yorkshire against a Surrey side inspired by Dominic Sibley.

Gary Ballance ends the summer as Division One's highest scorer with 1,251 runs, form which secured him a ticket on the England plane for this winter's Ashes tour.

Surrey schoolboy Sibley added 22 to his overnight score before being dismissed for 242 after 10 hours at the crease.

A declaration soon followed with a 200-run lead and they tore into the Tykes' top order to reduce them to 21-3.

Jonny Bairstow (35) and Kane Williamson (60) rebuilt before Ballance marched to an unbeaten 108 as the draw was called with Surrey 265-6.

Zimbabwe-born batsman Ballance, who was recently named in England's touring party for this winter's Ashes, ensured he overhauled Derbyshire's Will Madsen at the summit of the Division One scoring charts and ended the season with over 1200 runs with his fifth century of this summer's County Championship.

But this encounter is sure to be remembered for the efforts of an 18-year-old rookie who was given four days leave from his A-level studies and went onto to become the County Championship's youngest ever double-centurion.

Sibley was bowled by a yorker from former England pace bowler Ryan Sidebottom - a just prize for the veteran after he took the teenager's edge the previous afternoon, only to see Bairstow spill the catch.

It brought an end to a wonderful 536-ball, 26-boundary innings that looked to have given relegated Surrey a chance of only their second win of the summer.

And that result seemed even more likely when the visitors suffered an early collapse, but Ballance came to the crease and ensured the Championship runners-up staved off defeat by becoming the first Yorkshire batsman since Younus Khan in 2007 to hit two centuries in a match.

"Dominic Sibley will rightly take the plaudits. I was so impressed that twice he got stuck and was struggling to score but didn't change his style and throw his innings away - that's the sign of a fine player.

"To bat for that long in only your third county match is fantastic but it is not that new to him. I've known him for six years and in men's club cricket he scored two double hundreds as a 15-year-old.

"He'll go back to school now, finish his A-levels and we look forward to welcoming him back in the second half of next season."