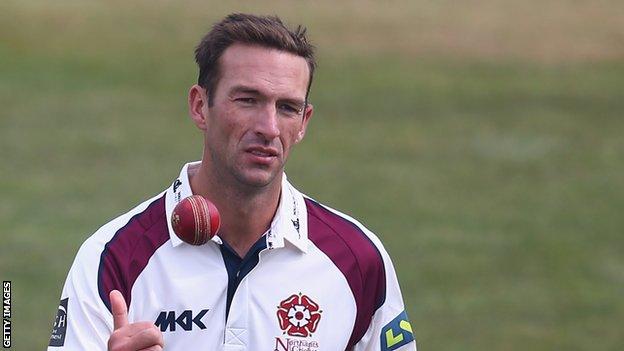 Australia seam bowler Trent Copeland will not be eligible to play again for promoted Northants next season.

The 27-year-old would need to have played a Test match in the past two years to qualify, but made his last appearance in September 2011.

He told BBC Radio Northampton: "It's a frustrating thing. I'm qualified this year, why can't I be next year?

"Unfortunately the last time I played a Test was outside a two-year window, which makes me ineligible."

Copeland played three Tests against Sri Lanka two years ago, and if he were to receive a call-up into Darren Lehmann's Australia squad and play a Test against England this winter, he would become eligible to play county cricket next summer.

He contributed 45 first-class wickets at an average of 18.26 in two spells for Northants this summer.

And despite their promotion, they did not win a single Championship game without him in the side.

"Should I play a Test match in the next 12 months the situation changes. For my own career and the prospects of coming back to Northants that would be great," he said.

"I'd love to help the boys establish themselves as a Division One club after doing the hard work to get there.

"If I can't come back, I will certainly help Rips (head coach David Ripley) get the best person for the job through my mates in Australia or guys I've played with for New South Wales."