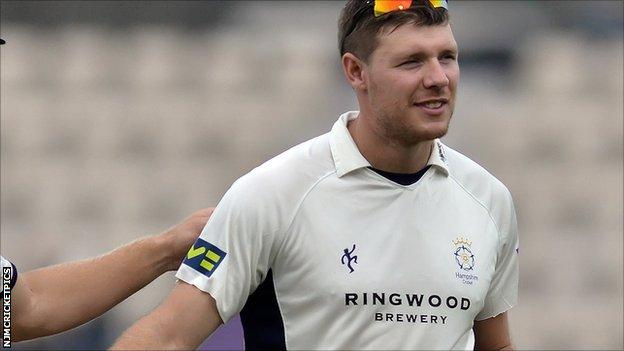 Hampshire have completed the signing of Kent all-rounder Matt Coles on a three-year contract.

The 23-year-old has been on loan with Hampshire since August, and produced career-best bowling figures of 10-154 against Essex this week.

"I'm happy with the outcome and I think it's going to be an exciting move and a productive move.

"When you go on loan, you ideally stay the year after, so I'm looking forward to my time here" he told BBC Solent.

Coles, who was also a target for Derbyshire, is a right-arm fast medium bowler and left-handed batsman, who also has experience of playing for the England Lions squad, from which he was sent home from Australia in February for disciplinary reasons.

He took an impressive 21 wickets in five matches at an average of 24 while on loan, and also made half centuries against Worcestershire and Lancashire.

"I'm excited with the group of lads they've got here and hopefully it will be a good time for Hampshire cricket and that I can contribute to that," he added.

"There was other counties interested but having come here on loan it was the right choice."