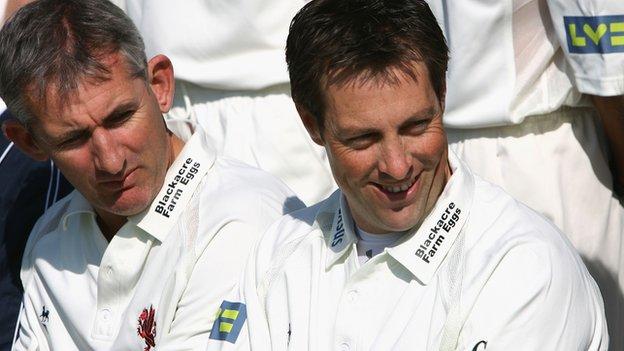 With Somerset in their final match of the season, opener Trescothick has yet to score a Championship century.

"As far as I'm concerned, his position in the team as a batter has to come first. If he steps away from the captaincy and concentrates on his batting then he needs to make that decision.

"We want to continue seeing the best of him and see him scoring hundreds of runs at the County Ground."

Trescothick made his Somerset debut in 1993, two years after Caddick's arrival, and has spent his entire 20-year career with his home county.

The former England opener has hit 21,048 first-class runs in total, including 51 centuries.

"I don't know what's going through his head right now, but for the best of the team and himself, the pressure needs to come off him," said Caddick.

"I don't know whether that decision is down to him or the club. I'm sure that's something that will be talked about over the winter."

Trescothick endured four consecutive ducks earlier in the season, including a pair in the Championship match with Sussex, and his highest score of 87 came in the YB40.

Alongside his loss of form, Somerset have struggled in Division One and were involved in a relegation battle which ran to the penultimate day of the season when their safety was guaranteed by Derbyshire's defeat against Warwickshire.

Caddick believes the Somerset players must now regroup ahead of next season.

He said: "He [Trescothick] had a bad season and it's one of the main reasons the club haven't done well this season.

"He's a great guy but, at the end of the day, he can't carry the club. There are players in that team who need to say to themselves 'I'm 100% committed to Somerset and the only way we're going to gel together is if I do my job well'.