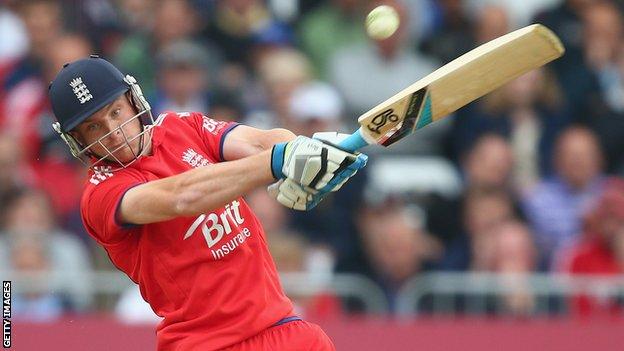 Lancashire have signed England limited-overs wicketkeeper Jos Buttler after he

but the 23-year-old opted to join the

Buttler is keen for more opportunities behind the stumps, having at Taunton.

He also hopes his move will improve his chances of providing competition for England's first-choice Test keeper Matt Prior.

They have a strong squad and are very ambitious to build on this season's achievement. Lancashire have a talented group of players who will be looking to challenge for all three competitions

Buttler said gaining more international recognition and improving his glove work were key motives for his move to the North West, telling the club website: "Lancashire has an exceptional coaching staff which will help me to continue to develop as a keeper-batsman.

"They have a strong squad and are very ambitious to build on this season's achievement. Lancashire have a talented group of players who will be looking to challenge for all three competitions.

"I want to pay a special thanks to everybody at Somerset. I thoroughly enjoyed my time there and will leave with plenty of good memories."

Having been England's regular white-ball keeper for most of 2013, and despite a series of impressive displays in the recent one-day series against Australia, Buttler missed out on a place for the return Ashes tour this winter.

Yorkshire's Jonny Bairstow will provide back-up to Prior, although Buttler could still be called upon, having been named in England's performance programme squad.

At county level, Buttler made nine Championship appearances for Somerset in 2013, ending the campaign with 508 runs at an average of 36.28.

But he kept wicket on just three occasions while Kieswetter was sidelined with a broken thumb early in the season.

With and with only youngster Alex Davies in reserve, Buttler is almost certain to be used in that role more frequently during his time at Old Trafford.

Head coach Peter Moores added: "His style of cricket will add value to the team in all formats of the game and his potential as a player is very exciting."