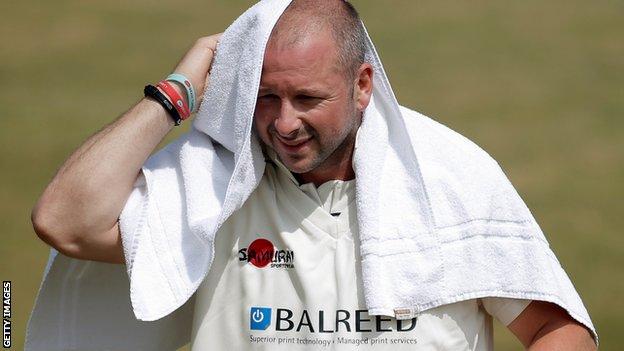 Darren Stevens has admitted the unbeaten double century he claimed for Kent on Friday could be his last innings in professional cricket.

All-rounder Stevens, 37, is facing a global ban of between one to five years after being charged by the International Cricket Council with failing to report a corrupt approach.

It's been an emotional summer, emotional end of the day and it's great fro Kent CC to get over the line and have a first win at home this summer

He hit 205 not out against Lancashire on Friday to steer Kent to victory.

"This could be the last first-class game I play," Stevens told BBC Kent.

"It could be (last game) and I'm very proud and honoured to have done what I've done at Kent and fingers crossed it carries on."

The ICC's Anti-Corruption and Security Unit charged nine individuals in August in relation to "an alleged conspiracy within the Dhaka Gladiators franchise to engage in match-fixing and spot-fixing activity".

Stevens played 12 matches for the Dhaka Gladiators in the BPL earlier this year as the side won the tournament.

Under the Bangladesh Cricket Board's anti-corruption code, an individual who pleads guilty or is later found guilty by tribunal of failing to report a corrupt approach faces sanction, which could include a global suspension of between one to five years.

"As everybody knows it's been quite a tough year to be fair since it all kicked off on 8 April," added Stevens.

"It's been going on all summer so it's been an emotional summer and cricket's actually got me by with what's been going on. Fingers crossed it doesn't stop there but there is every chance it could do."

Victory was Kent's first at home this season and Stevens admitted it has been a difficult year for him on and off the pitch.

"Yes, it's been an emotional summer, emotional end of the day and it's great for Kent CC to get over the line and have a first win at home this summer as apparently it was 1872 the last time we didn't have one win at home.

"So all around it's been a huge day. It's my third double hundred. I didn't think I was going to get it, but Rob Key came in and said he didn't want to face any balls so that helped."