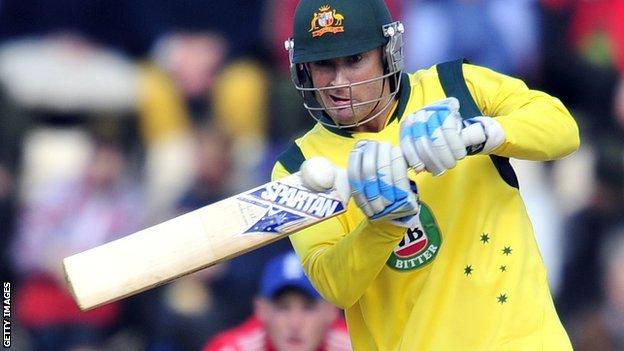 Australia captain Michael Clarke has been ruled out of the tour to India and requires "extensive rehabilitation" ahead of the return Ashes series.

The 32-year-old has suffered chronic back pain for much of his career and missed the Champions Trophy in June, soon after arriving in England.

Clarke will be replaced by Callum Ferguson for the one-day series and Twenty20 international against India.

And Clarke's withdrawal from the seven-match ODI series will prompt questions over his availability for the start of the Ashes, in Brisbane on 21 November.

Having finished bottom of their Champions Trophy group, Australia were beaten 3-0 in the Ashes - their third straight defeat in cricket's oldest Test series - before winning the one-day series 2-1.

Clarke hit a fluent 75 from 76 balls in the decisive fifth ODI having led by example during the Test series too, scoring 381 runs in 10 innings at an average of 47.62.

"During the recent England ODI series his injury flared up again and has been slow to improve with his regular treatment regime.

"Michael will therefore not be available to play the upcoming India ODI series and will require a more extensive rehabilitation period before returning to competitive cricket."

Ferguson last appeared for Australia in a one-day international against Bangladesh in April 2011.

The series in India begins with a Twenty20 international in Rajkot on 10 October and concludes on 2 November - 19 days before the start of the second Ashes series of 2013.