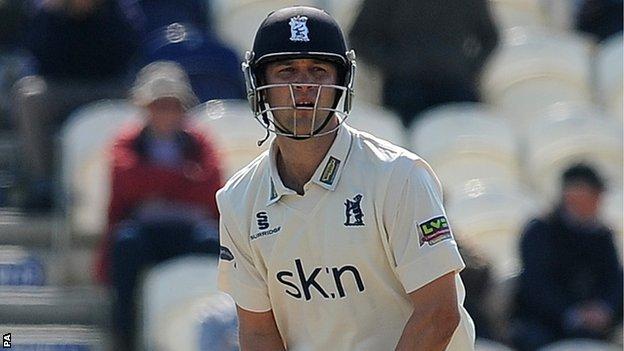 Warwickshire have given England batsman Jonathan Trott a benefit for 2014 - his 12th season with the county.

Trott, 32, has appeared sporadically for the Bears over the past four years since his successful England debut.

After a match-winning ton in the final Test of the Ashes series at The Oval in August 2009 in his first international game, Trott has now won 48 Test caps.

But the centrally-contracted England player has still played 16 Championship games for the Bears in that time.

Over the same period, he has also squeezed in 16 List A games and made 13 Twenty20 appearances - roughly a quarter of all of Warwickshire's games in all formats.

And both Trott and Warwickshire team-mate Ian Bell, the Bears' last beneficiary in 2011, remain very much part of the furniture at Edgbaston, despite their availability to play county cricket being limited.

"I love living in Birmingham," said Trott. "I had no hesitation in committing my long-term future to the Bears by signing a three-year contract extension.

"Warwickshire players, staff and supporters have been fantastic to me during my time here at Edgbaston. Their support has been instrumental in helping me win trophies with the Bears and establishing myself in England's Test and ODI teams."

As well as making a century on his England debut, South Africa-born Trott plundered 134 on his first-class debut against Sussex in 2003, having also hit 245 runs in his first trial match for Warwickshire's Second XI a year earlier.

"I played with Jonathan early in his career and could see that he had a special talent," said Warwickshire director of cricket Dougie Brown. "His runs in the 2004 County Championship were crucial to our success and built a platform for him to become one of the most dominant batsmen in the domestic game.

"He's been a great servant to the Bears and is an excellent role model to aspiring young cricketers."