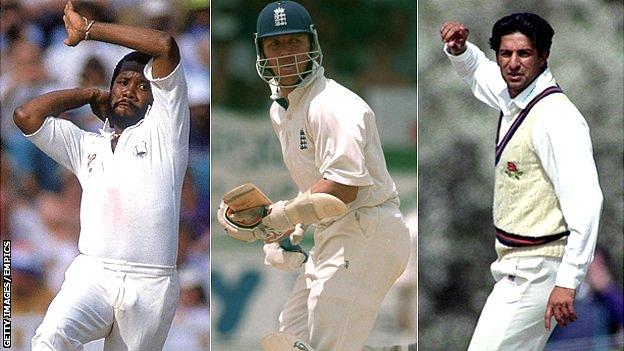 This week I answer some of your questions - on topics ranging from England's Ashes squad, my favourite Test century and the best bowler of all time.

Thank you to all those who sent them in on Twitter via the hashtag #AskStewie.

Who is the most promising new talent in England's cricket team? JReesh46

The England Test team is pretty established really, but Joe Root has come into the side in the last year and has not looked out of his depth one bit. He understands his own game and, while he has found opening the batting harder than being in the middle order, he is one of those people who just doesn't look fazed when he is playing at the top level. He has the talent to back it up too.

Other young players who appear to have bright futures are Yorkshire's Gary Ballance and Dominic Sibley at Surrey.

If wicketkeeper Matt Prior gets injured on the Ashes tour, would you play Jonny Bairstow or bring someone else into the team, like Steven Davies? Mike Linwood

Jonny Bairstow is England's reserve wicketkeeper and, for the purposes of continuity, he would come into the team. However, if Prior suffered a serious injury then the selectors would add another keeper to the squad. They would then consider players like Davies, Jos Buttler and Craig Kieswetter.

Which shot did you like to play to get guaranteed runs on the board early in your innings? Rob Green

Anything which brought me a run to get off the mark really, Rob! I didn't have a certain shot I used because you are very much reliant on what type of ball is being bowled. Whether you are on nought or 150 not out, you still need to wait for the right ball to score off and know when to defend the good deliveries.

In terms of my favourite shot, I liked the pull and hook but I was also strong when turning the ball off my hip behind square leg.

What was your favourite Test century? Jonathan Veal

Any century in a winning cause is up there, but I'd have to go with my two hundreds in the same match against West Indies in Barbados in 1994. It came after we had been bowled out for 46 in the previous Test in Trinidad and against an attack containing Courtney Walsh and Curtly Ambrose. Those two would get into most people's World XI of that time, and it was always a challenge against them, but we bounced back strongly in Barbados and became the first touring side to win there for 59 years.

It's hard for me to judge bowlers from before the mid-70s because I didn't play against them or, in other cases, just don't remember them! I've always said the two best quicks I faced in my career were Malcolm Marshall and Wasim Akram. They had pace, regularly getting above 90mph, and they also had control. They were clever bowlers. The best spinner I faced was Shane Warne.

Who used the biggest bat during your time as a player? KippaxCricket

I'd probably have to say Surrey's David Ward, who had a bat in excess of 3lbs - he didn't use it all the time but had in his bag. In the mid-80s it became the fashion to have heavy bats, whereas now bats are big but a lot lighter. Most players now use a bat weighing 2.8 or 2.9lbs, like I did when I played, but it used to be that you had to have a heavier bat if you wanted a big piece of wood.

Graham Gooch used heavy bats for a while and the former West Indies international Collis King is still using a bat which weighs 4lbs when he plays in the northern leagues.

Where does Dominic Sibley rank with young cricketers that you've seen coming through at a similar age? Bradley Wetenhall

Dominic became the youngest player to hit a double century in the County Championship when he scored 242 against Yorkshire, and it was an unbelievable performance for an 18-year-old in only his third match. The way he played, the length of time he batted and how he scored his runs were impressive because they came against an attack which helped Yorkshire finish second this season.

I became aware of Dominic when he was 13 and I have followed his career with the Surrey age groups closely since.

I know his family well and he is a very grounded individual who has gone back to school to continue studying for his A-Levels now. I bet he enjoyed telling his mates all about his knock in assembly this week!

T20 aside, with a strong side of youth and experience on paper, why did Surrey perform so poorly this year? Jim Clark

It's a fairly simple answer really - we just didn't play well enough. We had no consistency to our performances and results, and we were punished. The County Championship table doesn't lie and we now have to make sure we bounce back stronger next summer in Division Two.