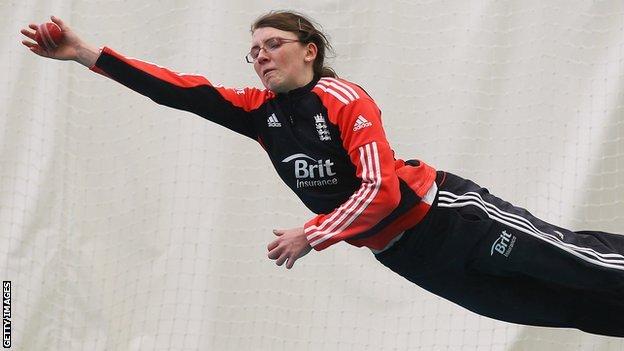 Uncapped seamers Beth Langston and Kate Cross are in England's 14-strong squad for their upcoming limited-overs internationals in the West Indies.

Charlotte Edwards's side face a triangular Twenty20 series against West Indies and New Zealand, before playing three ODIs against the Windies.

The tri-series, which takes place in Barbados, starts on 14 October, with England's first game against New Zealand two days later.

Who are England's newcomers?

Cross and Langston, both 21, and wicketkeeper-batter Amy Jones are the only players heading to the Caribbean who were not in the squad for the multi-format Women's Ashes, which England won 12-4 on the points-based system.

"With a few experienced players currently rehabilitating injuries sustained during the Ashes campaign, a number of young players will have the opportunity to play key roles for the side in what promises to be an exciting tour."

A 15-player squad for the return Women's Ashes series in Australia - which starts in January - will be named in December.