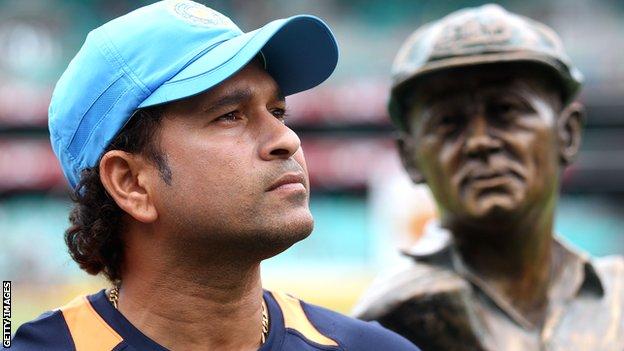 International cricket's top run-scorer Sachin Tendulkar believes sub-continent teams will be hard to beat in the 2015 World Cup in Australia and New Zealand.

At a ceremony marking 500 days until the tournament's start, the 40-year-old said: "Along with India, Pakistan and Sri Lanka are also good sides."

India are top of the one-day rankings, Sri Lanka fourth and Pakistan sixth.

Tendulkar, who has scored 15,837 Test runs in 198 matches, is the only man to score 100 international centuries and is also the highest run-scorer in the history of the World Cup, with 2,278 runs from 45 matches.

He thinks India are capable of becoming only the third nation to successfully defend the title, after the West Indies - who won the first two World Cups in 1975 and 1979 - and Australia, who claimed three successive titles from 1999-2007.

2007 in West Indies: Won by Australia

2003 in South Africa: Won by Australia

"I think most of our guys have been to Australia. They know what to expect, they have played there already," said the legendary batsman, who along with Pakistan's Javed Miandad is the only player to have appeared in six World Cups.

"It would give so much happiness to the entire nation. That is something I would want, along with a billion-plus people who will also be expecting the same thing to happen."

Tendulkar admits New Zealand conditions might be more difficult for Indian players to adjust to, although the team won their most recent away series against the Kiwis 3-1 in March 2009.

Recalling a four-wicket World Cup defeat by New Zealand in 1992, he said: "I remember our match in Dunedin, where it was extremely cold and windy. Whenever a batsman hit the ball with the wind, it would travel 10 yards further, but when we had to play against the wind, the ball travelled 10 yards less.

"As there is a tour to New Zealand planned in early 2014, it should give them good exposure to the conditions there."

India are in Pool B with South Africa, Pakistan, West Indies, Zimbabwe, Ireland and a qualifier.

England have been runners up on three occasions, most recently in 1992 when the tournament was held in Australia and New Zealand.

They have been drawn in Pool A with the two host nations, plus Sri Lanka, Bangladesh, and two qualifying teams.

"We got close to winning our first 50-over ICC event finishing as runners up in the Champions Trophy [this year] and will be working hard in the coming months to ensure we give ourselves the best possible opportunity to go one step further in 2015," said Cook.

"Playing cricket in Australia and New Zealand is always a fantastic experience and I have no doubt it will be another great occasion both for the teams and their supporters," he said.

The tournament will start on 14 February 2015, when New Zealand host Sri Lanka in Christchurch, and England meet Australia in Melbourne.