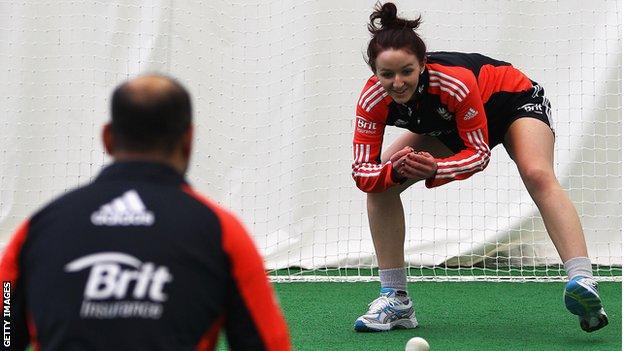 Kate Cross was shocked to receive a call-up to the senior England team for their upcoming tour of the West Indies.

They will take part in a triangular Twenty20 series against West Indies and New Zealand, before playing three one-day internationals against the Windies.

Lancashire pace bowler Cross, who is 22 on Thursday, is one of two uncapped players in

"It's all been a bit overwhelming actually. It was very surprising," she told BBC Radio Manchester.

"I found out that I was in the performance squad about 10 days ago, so that was a big step for me. This has just been that further step."

Essex bowler Beth Langston is the other player in the party yet to receive international recognition.

Four of the team that earlier this year - Anya Shrubsole, Heather Knight, Katherine Brunt and Laura Marsh - are all injured and will not travel, while all-rounder Arran Brindle will miss the tour for personal reasons.

A 15-player squad for the in Australia, which starts in January 2014, will be named in December and Cross - who was a late addition to the squad that toured Australia in 2011 but did not make an appearance - is not taking selection on that trip for granted.

"Nothing's guaranteed," said Cross, who made her debut for Lancashire at the age of 13 and has been part of England's academy setup for several years.

"There are a lot of injuries at the moment and a lot of girls are hoping to be ready for the Ashes tour, so there's definitely going to be a lot of competition for places."