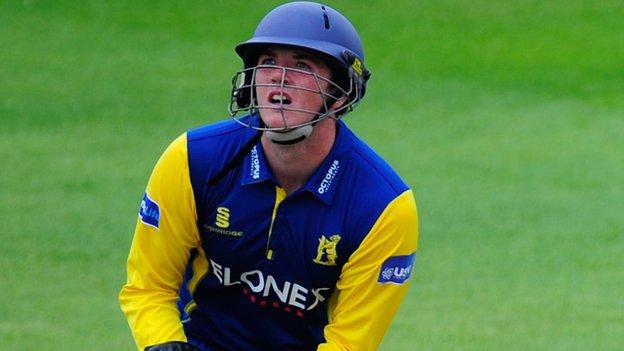 Warwickshire have bolstered their playing staff for 2014 by signing three of their Edgbaston academy products.

Teenage wicketkeeper Pete McKay, 19, who has already made his Bears debut, and batsmen Tom Lewis, 22, and Jon Webb, 21, have all signed their first professional contracts.

"Tom and Jonathan are both really good young players who have come through the system," said coach Dougie Brown.

"And we've already seen that Pete McKay has a lot about him."

Lewis, who is yet to play first-class cricket, made his Warwickshire second-team debut in 2008 and has also gone on to represent the Marylebone Cricket Club Young Cricketers.

Webb, a former Bromsgrove School team-mate of Worcestershire wicketkeeper Ben Cox, has been away for the past three summers with Leeds/Bradford MCCU.

Warwickshire's dual award winner Jeetan Patel (above right) receives his player of the year award from Bears captain Jim Troughton. The New Zealand all-rounder was the Bears' leading Championship wicket taker, with 52, also claiming 16 victims in the YB40 and 10 in the FLt20. He has now taken 208 wickets in all competitions since first signing for the county in 2009.

As for McKay, after being called into the Bears squad for the pre-season trip to Abu Dhabi, he then featured mid-season, playing in all 10 of Warwickshire's FLt20 matches, as well as five YB40 games.

After Tim Ambrose's season-ending broken thumb, McKay was then called up for his County Championship debut against Nottinghamshire at Trent Bridge, only to get injured while batting, denying him the chance to keep wicket.

"He slid and rolled his ankle ligaments," said Brown. "But he was playing in that game with a broken finger anyway and we saw from his performances in white-ball cricket, that he has plenty to offer.

"As for the other two, with Freddie Coleman and Sam Hain also sitting on the periphery, that's going to help balance up the batting."

Warwickshire have also offered a contract to fast bowler Maurice Chambers, who finished the summer at Edgbaston on loan from Essex, as a result of the Bears' many injury problems.

Chambers ended the season in fine form, taking 14 wickets in four matches, including 5-68 on his Bears debut, as well as hitting a career-best 58 in the season-closing win over Derbyshire.

But, with Chris Woakes having been spurned by England this winter and injured pair Chris Wright and Oliver Hannon-Dalby expected to have long since reported back fit by next April, Chambers has much to deliberate over, as his opportunities in 2014 might prove limited.

Bears all-rounder Jeetan Patel was voted player of the year by both his team-mates and the county's members.

"Along with Allan Donald, Brian Lara and Shaun Pollock, Jeets has to be one of the best overseas players in Warwickshire's history," added Brown.

The New Zealand Test player's total of 52 Championship scalps made him the Bears' leading wicket taker, while he also weighed in with 438 runs at 31.28.