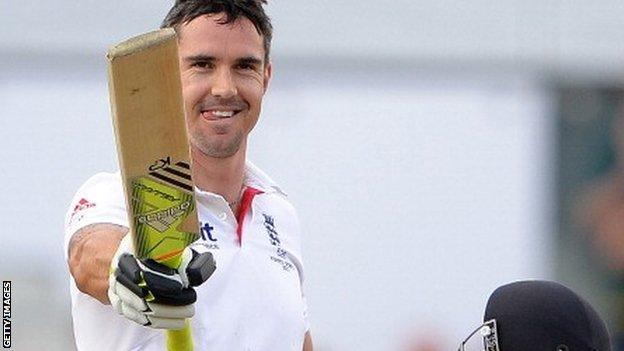 England batsman Kevin Pietersen has accepted substantial undisclosed libel damages over an advert which implied he might have tampered with his bat.

Opticians Specsavers used a photo of Pietersen in their "Should have gone to Specsavers" adverts in August, and on their Twitter and Facebook accounts.

The company accepted the 33-year-old did not behave in the manner suggested.

Pietersen was not at London's High Court for the settlement over the "serious and defamatory allegation".

What is Hot Spot?

When the ball comes into contact with the bat or protective gear, friction generates heat as a result of energy transferring from the ball, which usually shows up as a bright spot when filmed by special cameras

Specsavers had already removed the advert from circulation, where it had appeared in various newspapers, and also agreed to pay the Surrey player substantial damages and his legal costs.

The company's solicitor Niri Shan said they did not intend to imply that Pietersen may have tampered with his bat and acknowledged that the allegation was untrue and apologised for the distress and embarrassment caused.

During the summer Ashes series against Australia, Pietersen angrily denied reports - which emerged from Channel Nine in Australia - claiming he may have used special tape on his bat to prevent the detection of edges by Hot Spot cameras, describing them as "horrible lies".

He also tweeted at the time: "How stupid would I be to try to hide a nick when it could save me on an lbw appeal, like in [the] first innings where Hot Spot showed I nicked it."

Pietersen's solicitor Louise Prince said the allegations of bat tampering were completely untrue and without any foundation whatsoever.