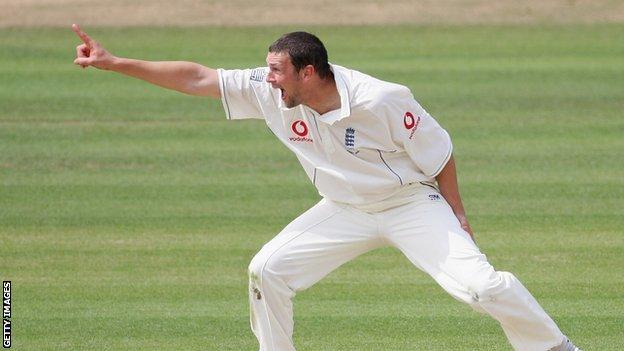 In 2006, I was asked to pick the best England team from the players I had seen or played with, and my decision to name Steve Harmison in my final XI raised a few eyebrows.

But I stand by my selection because when Harmison was in his prime there were very few that could handle him.

The man from Ashington, who announced his retirement on Sunday, had great pace, excessive bounce and was a game-changing wicket-taker.

When he was first drafted into the England set-up in 2002, facing him in the nets was a tough challenge that at times was not the most enjoyable experience. Many of the batsmen, me included, would do our best to avoid it but I think coach Duncan Fletcher quite enjoyed watching the contests unfold.

A natural athlete with similar attributes to the West Indies great Courtney Walsh, Harmison could unsettle any batsman at any stage of his innings. He could also be difficult to keep wicket to because of the way he would make the ball wobble once it had had flown past the stumps.

I remember one ball at the Waca in Perth which looked to be coming to me at about waist height. I got into position to take it but before I knew it I had taken a blow flush on the left shoulder. You try to take these things like a man and not show any signs of pain but it wasn't easy.

When Harmison first started he could be a bit erratic. He bowled some great spells but was also capable of wayward deliveries that would let a batsman off the hook. Being so tall, with such long levers, is a great asset, but it also means any error is also exaggerated.

However, under the tutelage of England bowling coach Troy Cooley, Harmison became a much more consistent performer and one capable of wrecking a batting line-up, as he did so famously in taking 7-12 against the West Indies in 2004 when he became the number one bowler in the world rankings.

The following year, along with Andrew Flintoff, Matthew Hoggard and Simon Jones, Harmison formed part of one of the most hostile pace attacks England have ever fielded as a team captained by Michael Vaughan beat Australia to win the Ashes for the first time in 18 years.

Andrew Flintoff and Kevin Pietersen were feted as the heroes of that series, but Harmison set the tone for England's success with his brilliant aggressive spell on the first morning of the opening Test at Lord's.

In striking Justin Langer on the elbow and drawing blood from Ricky Ponting's face, Harmison made a statement that England were ready for the battle and would not be taking a backward step.

It is for game-changing moments like this that Harmison should be remembered and not for his infamous wide to second slip in Brisbane at the start the return Ashes down under in 2006-07.

Harmison appeared to be overawed by the occasion of a series that was hyped up more than any contest I can remember and his nerves got the better of him.

For all his qualities as a tall, aggressive fast bowler, he wasn't the most outwardly confident person.

Unlike Darren Gough and Dominic Cork, who relished the limelight and enjoyed the glamorous side of playing for England, Harmison was never happier than when he was back home in Ashington, playing a game of darts over a pint with a few of his mates.

Given his natural shyness, I think Harmison struggled with Nasser Hussain's direct style of captaincy (which was exactly what England needed when he took over) but thrived under Vaughan, who was more of a people person and tried to get the best out of each player by understanding their personality.

I always got on well with Harmy - our shared passion for football led to plenty of banter about our beloved teams Newcastle and Chelsea - and I wish him the very best for the future.

Anyone who has played at such a high level for such a long period of time still has plenty to offer the game.