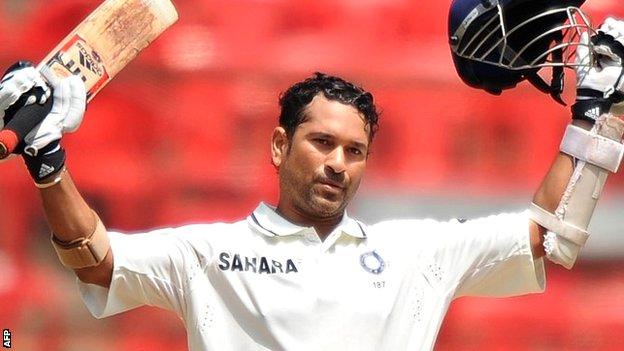 Legendary batsman Sachin Tendulkar will retire from all forms of cricket after playing his 200th Test next month.

The 40-year-old former India captain, who retired from one-day internationals in December 2012, will end his career with two matches against West Indies.

"It's hard to imagine a life without playing cricket because it's all I've ever done since I was 11," he said.

He only made one international appearance in the shortest form of the game, scoring 12 from 15 balls against South Africa in December 2006

He made his international debut aged 16 in November 1989 and last year became the only batsman in the history of the game to reach 100 international centuries.

"All my life, I have had a dream of playing cricket for India. I have been living this dream every day for the last 24 years," Tendulkar said.

He played his final Twenty20 match last weekend in the Champions League T20 final between his Mumbai Indians team and a Rajasthan Royals side led by another former India skipper, his long-standing team-mate Rahul Dravid.

Tendulkar's final appearances will also take place in India and he said: "It's been a huge honour to have represented my country and played all over the world. I look forward to playing my 200th Test match on home soil, as I call it a day."

He also holds the record for the most number of Test appearances, with Australians Ricky Ponting and Steve Waugh joint second on 168, followed by Rahul Dravid (164) and South African Jacques Kallis, who is still playing, on 162.

The president of the Board of Control for Cricket in India, N Srinivasan, said: "He is without doubt the greatest cricketer India has produced.

"In fact, one should really say he ranks among the top of all-time great sportspersons in the world. No one has served Indian cricket as Sachin has.

"He has truly been an ambassador for India and Indian cricket. He has been an inspiration for generations of sportsmen, not just cricketers.

"We respect his decision to retire, although many of us can't imagine an Indian team without Sachin."

Tendulkar was tipped for greatness from an early age, and whilst still at school in 1988 he made an unbeaten 326 in a stand of 664 with Vinod Kambli in the semi-finals of the Harris Shield.

His first Test century came in his 14th innings and was against England at Old Trafford in 1990.

There were six double centuries, the first of which came against New Zealand in 1999 and the most recent a 214 against Australia in Bangalore in October 2010, with his highest score an unbeaten 248 against Bangladesh in 2004.

It was hoped his 100th international hundred would be in the 2,000th Test match, which was against England at the home of cricket, Lord's, in 2011 but he was dismissed for 34 and 12 and the feat was achieved in an ODI the following year.

One of his most memorable Test centuries was an unbeaten 103 that inspired India to victory against England in December 2008 and came shortly after terror attacks hit his home city of Mumbai.

Tendulkar was popular across the world, and in 1992 became the first overseas player to sign for Yorkshire, scoring more than 1,000 runs in the summer.

BBC cricket correspondent Jonathan Agnew said on Twitter: "Perfect symmetry to Sachin's retirement: 200th Test, not confirmed, surely to be played in Mumbai. Also a charming man to deal with, which I have been fortunate to do many times."

Former England captain Michael Vaughan tweeted: "One of the greatest ever Sachin Tendulkar is retiring. One of my heroes and an absolute joy to play against."