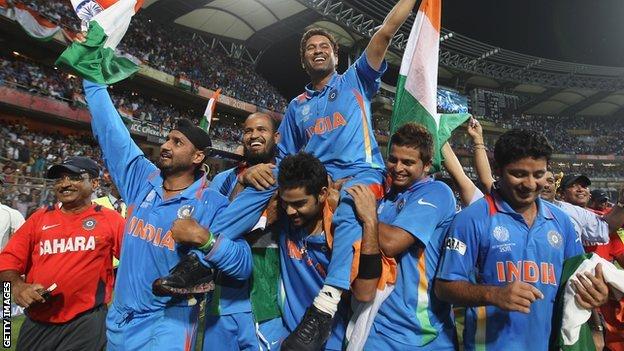 The scene was extraordinary. I can remember sitting in a commentary box in Ahmedabad, with a view over the city, when Sachin Tendulkar came out to bat. All of a sudden, a cloud of red smoke erupted.

It was caused by thousands of Indian cricket fans on motorbikes that churned up dust and blew out fumes in the surrounding streets as they rode up to the ground to see their hero bat.

That is the kind of attention and adoration that Tendulkar has attracted in his homeland throughout a long and successful career. The man is such a big celebrity that leading a normal life has been impossible. And yet, under enormous pressure caused by a nation's weight of expectation, he delivered consistently.

Tendulkar's career will come to an end after the second Test against West Indies in November when he retires from all forms of cricket. It is something that has been talked about for a long time, and there's a perfect symmetry to it.

He'll finish with his 200th Test match, which I'd say is nailed on to be played in Mumbai, although it's not been confirmed yet. It will be the perfect place for an outstanding cricketer and a model professional to bow out.

I would call him the best of his generation. Some people might say Brian Lara deserves that accolade, and there is no doubt that those two were the best of their time.

It is true that Tendulkar and Lara are completely different players, so comparing them is a difficult task. And in no way would I wish to belittle Lara, who was a wonderful player.

But if you were to put me on the spot to pick one above the other, the records show that it has to be Tendulkar. His record has been absolutely astonishing, and he's done it under much more scrutiny.

He first came to the attention of the English cricketing public at Old Trafford in August 1990, when a magnificent unbeaten 119 salvaged a draw for India in the second Test.

He went on to prove he could play in all conditions. He was phenomenal. He could bowl and bat. He had some great battles with Shane Warne.

The only thing that would be a slight disappointment was his captaincy. He had 25 Tests as a captain; a relatively small number for a player of his profile. Of those, he won only four and lost nine.

Captaincy didn't affect his batting, but he didn't have a happy time in the job. It's hard to explain why, but it just didn't work, and it was the right move when Sourav Ganguly took over.

* denotes appearance for the ICC in a match given Test status

Tendulkar, though, is rightly lauded. In India, you will never hear a single dissenting voice about him. He's up there on a pedestal.

And off the field, he's always been an absolute joy to deal with. I've interviewed him on a number of occasions, and done a couple of question-and-answer events with him in London, and he's a lovely man.

I have many great memories of Tendulkar's batting. He scored an amazing century to win a Test against England on a wearing pitch in Chennai in 2008; our first visit to the country following that year's terror attacks in Mumbai.

He was never a flamboyant batsman, and he wasn't on that occasion either.

But he played some beautiful back-foot strokes and demonstrated great skill against the spinning ball.

There is no doubt that his time to retire has come. His last century was 39 innings ago, and that's too long for a top-level batsman.

Had it been anybody else, he would have had a tap on the shoulder before now and been told it was time to move on.

But, in India, that would have been an impossible thing for coach Duncan Fletcher to do.

The end was always going to be on Tendulkar's terms, and I don't think anyone would begrudge him having carried on for a little longer than perhaps he should have done.

He always wanted to reach 200 Tests and to go out in Mumbai, which would be the perfect place for him to finish.

It will be fascinating to see what he does next. He has already entered politics, having taken his oath in the Rajya Sabha - the upper house of the Indian parliament - last year. There's charity work that he does too, I'm sure he will carry on with that.

He will also continue to take a keen interest in the progress of his 14-year-old son Arjun, a promising cricketer who plays for some of the year in London for Ealing.

Sachin comes over to coach him and is very happy with the way he's coming on. But there's an enormous pressure on Arjun too, simply because of who his father is.

There will also be pressure on the young India players looking to follow the great man. There will be feverish debate as to who will be the next Tendulkar and whichever player assumes that mantle will be under a huge amount of scrutiny.

He only made one international appearance in the shortest form of the game, scoring 12 from 15 balls against South Africa in Johannesburg in December 2006

But I think India, as a team, will move on very positively. There are some amazing players coming through.

Tendulkar can look back on an astonishing career. He is the only player to have scored 100 international centuries. He holds the record for the most hundreds in both Test and one-day cricket.

And what is more, he never blotted his copybook off the field.

You can Google everything you like about him and you will never find a bad headline.

Sachin Tendulkar has been a model sportsman.