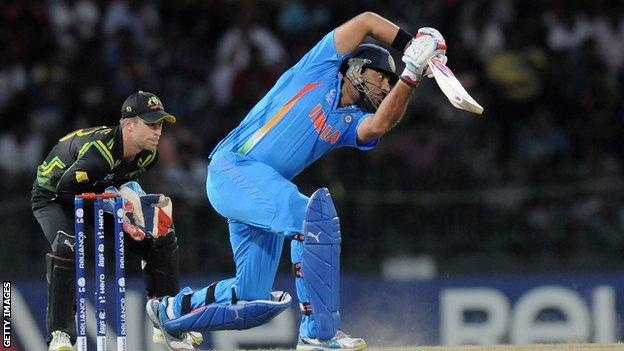 Yuvraj Singh, playing in his first international since January, scored an unbeaten 77 as India beat Australia by six wickets in their Twenty20 meeting in Rajkot.

The 31-year-old, who had taken further time off to work on his fitness following cancer treatment last year, reached his total off 35 balls as India passed Australia's 201 with two balls to spare.

The tourists lost momentum after Aaron Finch fell for 89 in the 17th over and did not exploit a promising position.

Finch will hope to find greater support from his team-mates when facing England later this year, with fellow opener Nic Maddinson's 16-ball 34 on his international debut one of only two other significant contributions to Australia's total.

But on the day that the legendary Indian batsman Sachin Tendulkar announced that he will retire from the game after the Test series against West Indies in November, Yuvraj did his best to steal some headlines.

He hit eight fours and five sixes with Mahendra Dhoni content to let his team-mate, who was diagnosed with a rare form of lung cancer in 2011 before returning to international cricket last year, take the initiative.

Australia gave themselves hope when Clint McKay lured Virat Kohli into an ill-judged heave that was taken by James Faulkner at long-on to leave the hosts on 100-4 with less than nine overs remaining.

But the visitors were undone as Yuvraj battered his way to his highest score in a Twenty20 international.