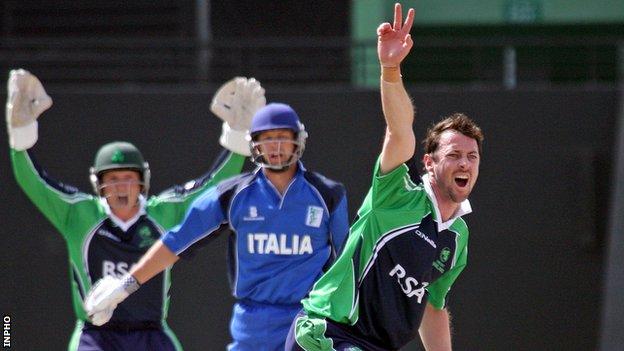 Ireland all-rounder Alex Cusack is back in the squad for next month's World Twenty20 qualifiers in the UAE.

The Clontarf player returns after being sidelined for the last month of the season with a back injury.

Cusack is also in the Irish squad for the InterContinental Cup final against Afghanistan in December.

Andrew White has been left out the T20 squad but the all-rounder is included for the InterContinental Cup decider against the Afghans.

White is Ireland's leading scorer in InterContinental Cup history with 1,502 runs at an average of 60.08.

He's an intelligent cricketer and a very canny bowler to have, especially in the power-plays

"It was difficult to leave Andrew White out of the T20 squad, but he hasn't played much for us in the format, and the selectors felt that it was a good chance to take a look at some of the other contenders," said Ireland coach Phil Simmons.

Ireland are attempting to make the World Twenty20 finals for a fourth successive time, and have been seeded number one in Group A of the 16-team event - six qualifiers will go forward to Bangladesh next April.

It is a familiar looking squad with 12 of the 15 players veterans of the 2012 finals in Sri Lanka. Andrew McBrine, James Shannon and John Mooney are the three players who didn't make that trip.

Simmons added: "It's good to have Alex back in the frame. He's an intelligent cricketer and a very canny bowler to have, especially in the powerplays. He mixes his pace up well and can be difficult to read for the batsmen.

"We also have John Mooney fit again after he missed the Scotland matches, so we've plenty of options in the bowling department. Eddie Richardson's probably a little unlucky to miss out, but we have a lot of all-rounders in our ranks.

"Andrew McBrine deserves an opportunity. He's done very well this season and his bowling will be a useful asset on the slower pitches in the UAE."