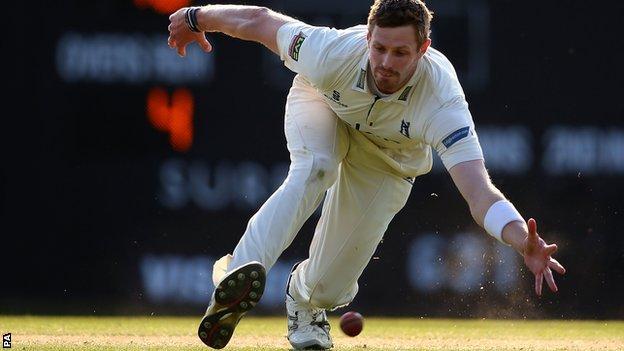 Boyd Rankin was only three games into his international career when he helped trigger one of the cricketing shocks of all time in 2007, bowling Ireland to a famous World Cup win over Pakistan in Jamaica,

He then caused another stir this summer when, having swapped countries, he enjoyed an impressive introduction to limited-overs international cricket with England.

That helped get the 6ft 8in Warwickshire fast bowler on the plane to Australia this winter.

Coupled with the faith of a man who clearly believes in him - his old Bears boss Ashley Giles, now England's limited-overs coach - Rankin now has the opportunity to deliver the goods on a stage on which he surely never seriously believed he would one day perform.

Current Warwickshire director of cricket Dougie Brown has no doubts that this Northern Ireland farmer's son, one of Test cricket's later starters at 29,, can perform at the highest level.

"He bowled a couple of terrifying spells in our final game of the season at Derby. And that bodes well for England.

"He's bowled well in one-day cricket which previously he'd never had the chance to do.

"And now he's got himself onto the England radar and into the Ashes tour party. The stage is set for him."

The same positive outlook comes from elsewhere in the Edgbaston dressing-room, from this summer's chief Ashes hero, Ian Bell, now his team-mate both for county and country.

Along with Jonathan Trott, the Bears have three representatives down under this winter, Rankin having leapfrogged a list of contenders that, only a couple of weeks before, had also included another county team-mate in Chris Woakes.

"It's great for him and for the county to have another Warwickshire player recognised," Bell told BBC Midlands Today. "He was outstanding in the one-day series against Australia and the harder pitches will suit him out there.

Following the likes of Andrew Caddick and Steve Harmison, the current roster of Stuart Broad, Steven Finn, Chris Tremlett and Rankin can bring something different to an attack by offering a bit of extra bounce.

"Over the last 12 months he's worked hard on his fitness and strength and we're now seeing the benefits of that," Bell explained.

"And he's being looked after now too in terms of getting the right rest."

But what of the man himself? How much does he believe in himself?

When Rankin first left his father's farm close to the small village of Broady in County Tyrone to move to England almost a decade ago, it was to train in agriculture at Harper Adams College in Shropshire.

Boyd Rankin is not the first England fast bowler to be born in Northern Ireland. Kent's Australian-raised Martin McCague, who played three Tests, all against Australia, in 1993 and 1994 was actually born in Larne, County Antrim

So how did he end up on the verge of a Test cricket career? Simple. He already had a love of cricket.

He showed his sense of the big stage when he took 3-32 to set up Ireland's St Patrick's Day World Cup win over Bob Woolmer's Pakistan, which was ultimately overshadowed by Woolmer's subsequent death.

And Rankin had already dreamt the dream that now sees him on the verge of being selected for an Ashes Test.

"It was quite easy in terms of making the decision of switching from Ireland to England," Rankin told BBC Midlands Today. "My main aim was always to play at the highest level and that is playing Test cricket.

"Right now, I'm just trying to enjoy every moment of it as it still hasn't all sunk in yet.

"But there's three matches coming up before the first Test in Brisbane.

"And it's really important to get out and do as well as I can. Then I might be in with a shout for that first Test."

England arrive in Australia for their Ashes tour next Friday, 25 October, and face tour matches in Perth, Hobart and Sydney before the first Test begins at the Gabba on 21 November.