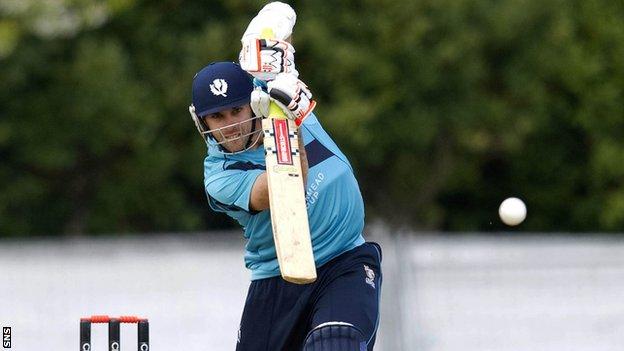 Scotland captain Kyle Coetzer is fit to return to the squad for next month's World Twenty20 qualifiers in the United Arab Emirates.

A wrist injury kept Coetzer, 29, out of and against Ireland.

"I'm really excited about the challenges that lie ahead," said Coetzer.

"It's a significant tournament and it's crunch time now."

Sussex young player of the year Matt Machan and Northamptonshire's David Murphy will also make the journey to Dubai, along with emerging talents Michael Leask and Matthew Cross.

All matches will be played in the United Arab Emirates.

However, Freddie Coleman and Calvin Burnett are unable to make the tour due to university studies and work commitments, respectively.

A 12-day tour to Sri Lanka and warm-up games against the United States and Namibia in Dubai will precede Scotland's opening qualifier against Bermuda on 15 November.

Six of the 16 teams competing will qualify for next year's World Twenty20 in Bangladesh, which begins in March.

"This is an opportunity to show the character of this squad," added Coetzer.

"Having the likes of and Craig Wright joining our coaching team is only going to add to the experience we have at our disposal.

"Paul has had a successful season at Durham, and being an Ashes and T20 World Cup winner he will bring that unique knowledge, and with Craig being a former Scotland captain, it's an exciting time.

"We've got the quality in the squad, there is no doubt about that, we just have to make sure that we show our potential."