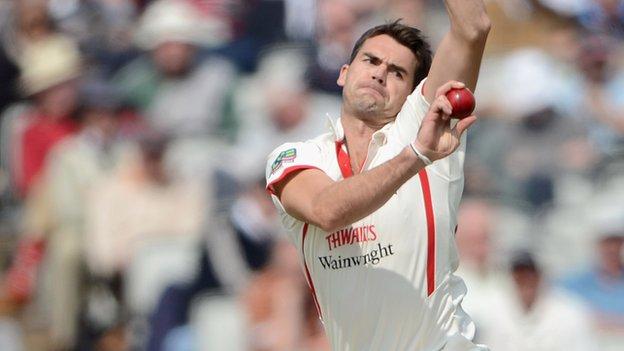 The 31-year-old has added an extra year to his current deal to keep him at the club until the end of the 2015 season.

Anderson, who is centrally contracted by England, played a key role in the recent Ashes win and heads to Australia for the return series this winter.

"I am always proud to wear the Lancashire shirt and I am delighted to extend my stay," said Anderson.

"It was great to return to Emirates Old Trafford in the summer for the Ashes Test match and use the great facilities after the ground's redevelopment."

Anderson has played 87 Test matches, 174 one-day and 19 Twenty20 internationals for England, taking 592 international wickets across the three formats, and signed a new two-year deal at Lancashire 13 months ago.

Lancashire director of cricket Mike Watkinson added: "Jimmy has been an outstanding player and a great ambassador for the club.

"It is great to see him play for us when his international duties allow him to, and we are pleased that he has signed a new deal for Lancashire."

Lancashire secured promotion back to Division One at the first attempt after they drew with Leicestershire and third-placed Essex drew at Kent last month.