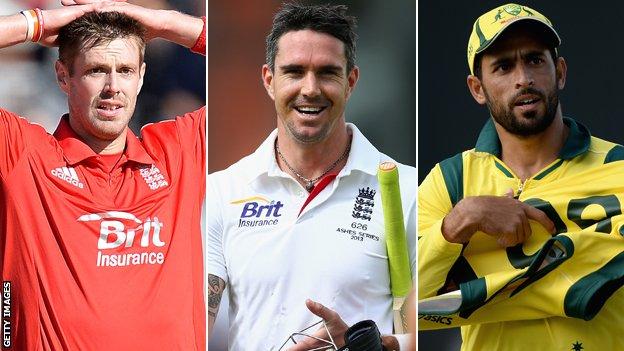 The subject of nationality and sport was back in the headlines last week after Jack Wilshere's comment that only English people should play for England and Kevin Pietersen's immediate reaction on Twitter.

My own opinion over what constitutes being English has softened a little over the years, but I do believe you have to draw the line somewhere.

In my view, if you were born outside England but have an English parent then you should still be eligible.

Graham Ford was always top of our list to take over as head coach at Surrey. He has bags of experience both internationally and domestically and understands the county system from his time at Kent. He has a reputation of improving people's games regardless of their age and can help realise the full potential of our talented and hard-working squad.

Another criteria I can accept as "being English" is if your parents moved here for humanitarian or work-related reasons and you were still at an age where you were then schooled in England.

But if you don't qualify on any of those grounds, then the door should remain firmly shut.

Qualifying on residency grounds alone as a matter of convenience and financial gain should not be permitted.

The pride in representing the country and wearing the England shirt or vest should come from within and not be influenced by your bank balance.

The England cricket team has a long history of selecting players who were born overseas, but in the vast majority of cases they have a bond to the country that would qualify them under my criteria.

In the current squad Pietersen, Jonathan Trott and Matt Prior all have an English parent, while Ben Stokes moved to the country from New Zealand at the age of 12.

Gary Ballance did play for Zimbabwe in the Under-19 World Cup at the age of 16, but after moving to England he took up a sports scholarship at Harrow and even attended the first year of a university degree course at Leeds Metropolitan University after joining Yorkshire in 2007.

Boyd Rankin is the only player I have slight difficulty with given the fact that he had played 37 one-day internationals for Ireland before qualifying for England. But he was born in Northern Ireland, which is part of the United Kingdom, and had no other route into Test cricket because Ireland are not a full member of the ICC.

In my day, you had Allan Lamb and Robin Smith, who were both born in South Africa to British parents and others such as Devon Malcolm and Gladstone Small, who moved over from the Caribbean in their early teens. Never once did I question their commitment to the country that they had come to regard as their home.

Sachin Tendulkar will be remembered as a cricketing god who was worshipped in his native India and hugely admired in the rest of the world. The Little Master's appetite for success over nearly quarter of a century is incredible and I'd be surprised if anyone comes close to matching his achievements. Despite his megastar status, he remained just as humble as the day he first picked up a bat.

Adnan Januzaj, the Manchester United midfielder who sparked this whole debate, had finished his education by the time he moved to England, and has no connection to the country whatsoever other than it being his place of work. He may go on to live here for five or 10 years, but that does not make him English.

In cricket, you have the case of Pakistan-born Fawad Ahmed, who did not move to Australia until he was 28 years old in 2010 but was granted citizenship in August and played against England in the one-day and Twenty20 series this year.

Fawad had entirely understandable reasons for emigrating, claiming he was being persecuted by religious extremists, and he has every right to seek to pursue his career in a new country.

But should he really be allowed to represent that country in international sport? Does he really feel Australian? Do the Australian public see him as an Australian?

I spent eight consecutive winters playing grade cricket down under, and thoroughly enjoyed everything the country had to offer, but at no stage did I ever contemplate playing for Australia!

My worry is that it is becoming too easy to switch nationalities out of pure convenience as a route into international sport. National teams are in danger of losing their identity as a result.

I would like to see specific qualification criteria applied across every sport in every country, so that everyone is playing by the same rules, and once you've represented a country at under-19 level or above there is then no switching of allegiance.

If not, international sport could lose just a little of its magic.