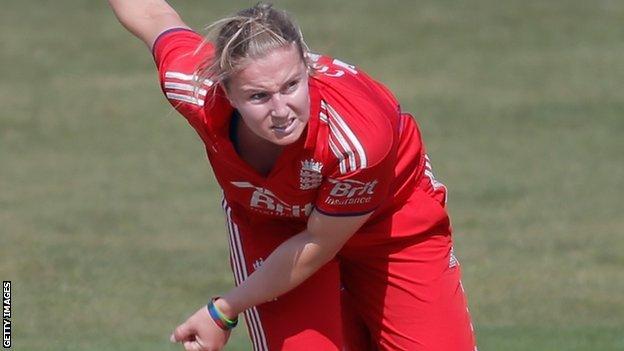 Spinner Holly Colvin believes New Zealand will be out for revenge against England in the early hours of Thursday.

England face the White Ferns - who they beat twice at this year's Women's World Cup - in Barbados, in a Twenty20 tri-series also involving West Indies.

"They will be looking to get revenge having not done so well against us in the World Cup," said Sussex's Colvin.

"New Zealand are a side never to be underestimated. They have got some strong hitters and some canny bowlers."

The triangular series began on Monday as the hosts beat New Zealand - who were bowled out for 81 - by 23 runs.

The time difference means the day/night fixtures take place in the early hours of the following day from a UK perspective, starting at midnight.

England have travelled to the Caribbean with an inexperienced squad as they are without several players who are recovering from injuries.

But Knight said: "Quite a few of our players came out of the Ashes injured so they have sent a young team out there.

"There are a few young and exciting players, so it should be good to see how they get on."

After the tri-series - in which the three sides play both opponents twice each before the top two meet in the final - England move to Trinidad for a three-game one-day international side against the Windies.