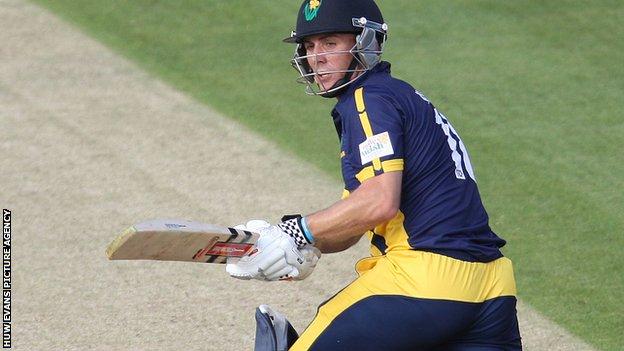 Captain Mark Wallace has extended his contract with Glamorgan until the end of the 2016 season.

Wallace made his Glamorgan debut as a 17-year-old against Somerset in 1999 and was appointed captain in 2012.

In 2011 he became the first wicketkeeper in Glamorgan's history to amass more than 1,000 first-class runs in a season.

"I'm very happy to extend my stay with the club," Wallace said.

"From being Glamorgan's youngest ever wicketkeeper, I have enjoyed becoming club captain and one of the senior players."

Wallace scored a career-best 139 and shared with Jim Allenby a Glamorgan record stand for the sixth wicket of 240 against Surrey at The Oval in 2009.

The 31-year-old also captained the side to a YB40 semi-final win over Hampshire and also led the side out at Lord's in the final.

Glamorgan lost to Nottinghamshire in the final but Wallace hopes the trip to Lord's will be the springboard for future success.

"Having sampled leading the side to play in a showpiece final at Lord's this year it has only made me and the rest of the dressing room more determined to continue to achieve future success with Glamorgan," Wallace said.

Wallace, who has represented England Under-19s, became Glamorgan's regular wicketkeeper in four-day cricket from 2001 and won his county cap in 2003.

He was a member of the Glamorgan side who won the National League title in 2004 and became the most successful wicketkeeper/batsman in Glamorgan's history in 2012.

Wallace passed Eifion Jones' club record for the highest aggregate of runs by a specialist wicketkeeper during a Championship match against Kent.