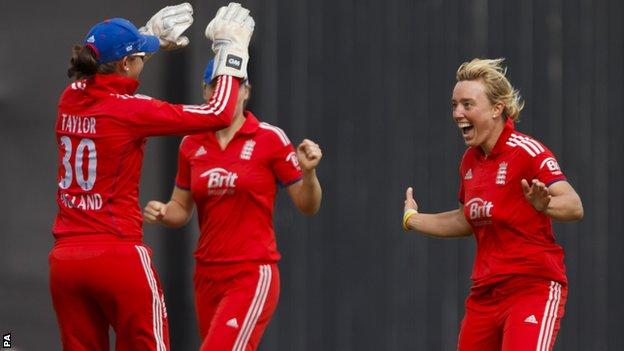 England got off to a fine start in the tri-nation Twenty20 women's series with a five-wicket victory against New Zealand at Bridgetown in Barbados.

Captain Charlotte Edwards made 42 before Tamsin Beaumont's unbeaten 29 from 23 balls helped England chase down a target of 110.

Earlier, Natalie Sciver and Holly Colvin took two wickets each as New Zealand were restricted to 109-6.

England play West Indies at the same venue on 18 October.

"It felt great to get out there and put in a great performance to get the team over the line," said Beaumont.

"Charlotte got us off to a good start and that meant I could just come in and express myself at the end."

Despite not taking any wickets, opening bowler Natasha Farrant was arguably the pick of the England attack, conceding only 12 runs from four overs.

Captain Suzie Bates top-scored for New Zealand with 48 off 51 balls.

Following their defeat by West Indies in their opening game, this was New Zealand's second loss of the tournament.

After the tri-series - in which the three sides play each opponent twice before the top two meet in the final - England move to Trinidad for a best-of-three one-day series against West Indies.