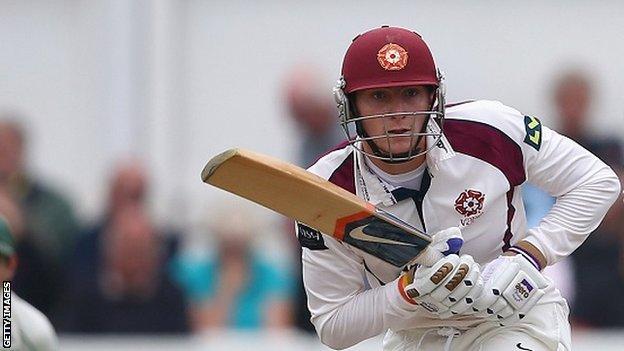 Keogh, 21, has signed a two-year contract, with the 23-year-old Newton agreeing a three-year deal.

Rob Keogh marks himself hard, but towards the end of last season he's shown what a good player he is

Keogh made 458 Championship runs in eight games last season, including a vital double-century against Hampshire.

Newton started the campaign strongly, scoring 251 runs in six matches before injuring his ankle in a one-day match against Kent in June.

"The double-hundred against Hampshire after we were 32-4 on a green wicket speaks for itself, but he backed that up against Worcestershire in the Championship, and also in the YB40.

"He marks himself hard, but I think he's shown himself what a good player he is. He's a local lad who has been coming to the club since he was 14, and it's good to see him taking his game to a higher level.

"Rob Newton is a destructive player in all formats of the game. He was in the last year of his contract last season and understandably wanted to see where we were as a club, but he saw enough before he was injured to know he wanted to be part of what we were doing.

"He's one of a group of young players who've come through the academy and want to be competitive."

Twenty-year-old batsman James Kettleborough, who did not play for the first team last season, has also signed a new one-year deal.