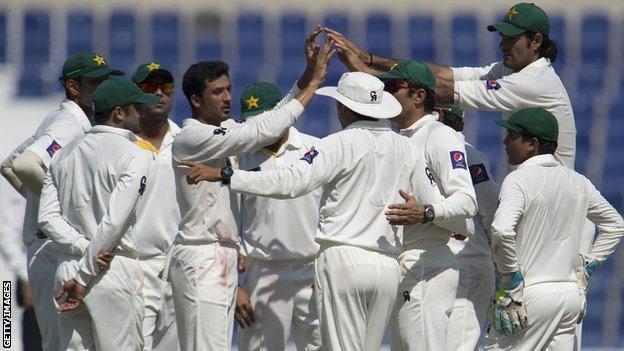 Chasing 40 to beat the world number one side on day four, Pakistan wobbled on 7-3 before completing only a fourth ever victory over the Proteas.

South Africa had previously been bowled out for 249 and 232, either side of centuries from Khurram Manzoor and Misbah-ul-Haq taking Pakistan to 442.

In their last Test match, Pakistan lost by 24 runs to Zimbabwe.

Most Test wins by Pakistan captains

Misbah's side had also been whitewashed 3-0 in South Africa in February, but they continued a fine run of form in the United Arab Emirates - their adopted home after a terrorist attack on the Sri Lanka team in Lahore in 2009.

Since then, Pakistan are unbeaten in nine matches in the UAE - a streak that includes the 3-0 whitewash of England in 2012.

Victory over the Proteas was delayed by the efforts of AB De Villiers and Robin Peterson, who at least ensured Graeme Smith's side avoided an innings defeat.

The tourists began the final day on 72-4 - still 121 short of making Pakistan bat again - and slipped further into trouble at 133-6 when Faf du Plessis drilled at off-spinner Saeed Ajmal, who took a fine return catch.

De Villiers, though, found an ally in Peterson for a busy stand of 57, only for the wicketkeeper to fall 10 short of a century, driving Junaid Khan to Shan Masood Khan.

Peterson's defiance continued, but with Ajmal wrapping up the tail for four wickets in the innings and seven in the match, Pakistan were facing a meagre target.

They stumbled as Vernon Philander and Dale Steyn tore through the top three, but Misbah, supported by Younus Khan, led his side to victory on 28 not out, sealing the win by hitting Peterson for six.

Pakistan lead the two-Test series 1-0, with the second match beginning in Dubai on Wednesday.