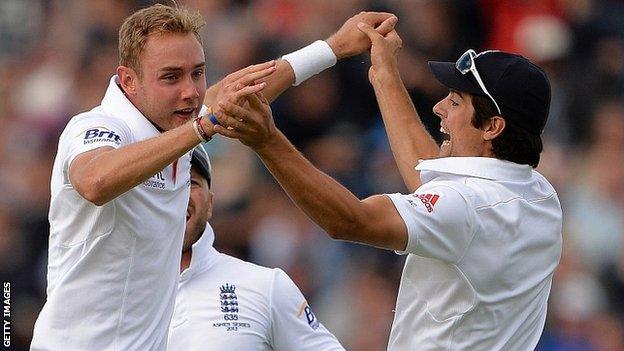 England can "dominate" the Ashes series down under, according to their former opener Marcus Trescothick.

England, 3-0 winners at home over the summer, fly out to Australia next week seeking a fourth straight series victory over their oldest rivals.

"I think the team is in good shape and England will do well over there," Trescothick told BBC Radio 5 live.

"Having shown we can beat them home and away I think we will continue to dominate at the moment."

Despite the margin of victory, England were outplayed for large periods of the drawn Tests at Old Trafford and The Oval, with several batsmen struggling for form.

Australia coach Darren Lehmann described England's cricket as "dour" and believes his team have found "cracks" in their opponents they can exploit on home soil.

Trescothick, however, is not concerned by England's style of play as long as they are getting results.

"I don't think it matters how you play and how you go about things," said the Somerset left-hander, who scored 5,825 runs in 76 Tests.

"They weren't that bad. They were better than Australia, which says a lot, and they have to go about it and continue doing what they have to do. As long as they get the runs on the board and take their wickets, that's all England will worry about."

Before flying out to Australia on Wednesday, England's players will gather for a pre-series 'boot camp' in an undisclosed location in the UK.

In 2010, a similar camp held in Germany's Bavarian Forest proved unpopular with players as James Anderson suffered a cracked rib in a sparring session with his fellow fast bowler Chris Tremlett.

But Trescothick believes they can be useful exercises in building team spirit.

"You can break people down a bit, and you get to know a lot more about each other than you do from playing cricket," said Trescothick, who is taking part in a 441-mile charity bike ride to raise money for the Tom Maynard Trust and the PCA's Benevolent Fund.

"You see a different side to people, you get used to the environments they live in. They're useful and they're good fun."

Meanwhile, Australia fast bowler James Pattinson says his recovery from a back injury is ahead of schedule and he is targeting the third Test in Perth.