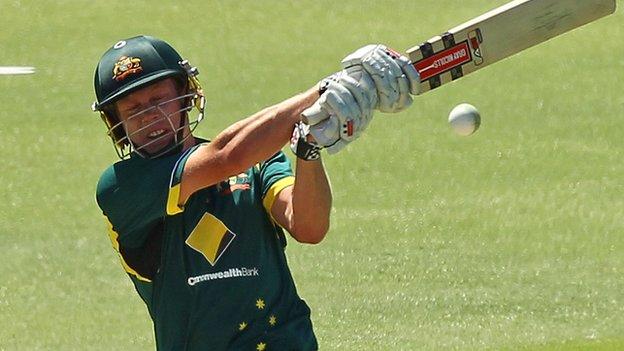 James Faulkner steered Australia to an unlikely victory, smashing 64 from 29 balls as they won another high-scoring one-day international against India.

Faulkner set a new Australian one-day international record when he hit 30 runs off one Ishant Sharma over, which included four of the six sixes he hit.

Most runs in an ODI over

Another Faulkner six secured a four-wicket win with three balls to spare.

Earlier, skipper Mahendra Dhoni came in with India 76-4 and blasted 139 not out to help them post 303-9 in Mohali.

Indeed, it was all-rounder Faulkner whose left-arm seam was hammered for 21 by Dhoni in the final over of the Indian innings, after the skipper had expertly farmed the strike in the last few overs.

But man-of-the-match Faulkner, batting at number eight, had his revenge, dominating an unbroken seventh-wicket stand of 91 with Adam Voges, whose 76 was overshadowed as Australia took a 2-1 lead in the seven-match series.

India's top order fell cheaply apart from Virat Kohli (68), and Dhoni found himself at the crease after only 13 overs as left-arm paceman Mitchell Johnson (4-46) ripped out the middle order, while wicketkeeper Brad Haddin picked up five catches.

The Aussies made a steady reply, but when stand-in skipper George Bailey (43) fell after adding 83 with Voges and Glenn Maxwell was run out in the same over, the tourists still needed 130 from the last 13 overs - although Haddin ensured they plundered 18 from the 40th, which was somewhat surprisingly entrusted to Kohli's part-time medium pace.

The target was 91 from 53 balls when Faulkner arrived in the middle, and 44 from 18 by the time he launched his 48th-over assault on Ishant, which turned the game on its head.

Five singles were added from the 49th over, leaving nine runs needed from the last - and with six needed from four deliveries, Faulkner launched a Vinay Kumar full toss over the leg-side fence to complete their highest ODI run chase against India in grand style.

The run-feast follows Wednesday's second match in the series, in which India pulled off the second highest run chase in ODI history to win by nine wickets in Jaipur.