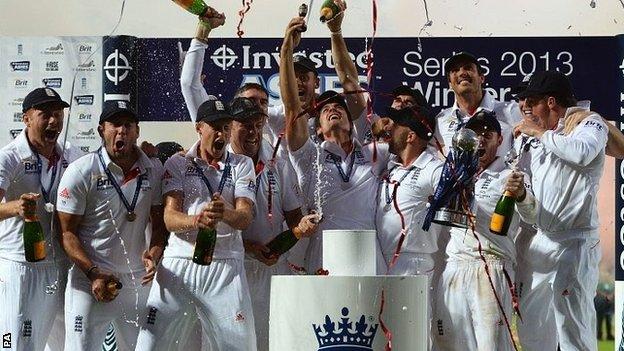 England are "red-hot" favourites for the Ashes down under, with a 5-0 whitewash of Australia on the cards, says former captain Sir Ian Botham.

Australia, beaten 3-0 in England this year, have been weakened by injuries to several fast bowlers.

"They are struggling with bowlers," Botham told BBC Radio 5 live's Sportsweek. "5-0 is a real chance."

Australia were beaten at Trent Bridge,Lord's and Durham but outplayed England for large portions of the weather-affected draws at Old Trafford and The Oval.

"Are Australia better than the recent scoreline suggests? No," said Botham, England's highest Test wicket-taker with 383.

"They are rebuilding but I think they are struggling. They have got a lot of injuries. I think England are red-hot favourites.

"What's my forecast? Oh, I have to stay with 5-0. Just to annoy the Aussies. It's possible. It really is possible."

Botham believes the bouncier surfaces down under will lend themselves to more riveting cricket.

"I expect to see pitches with more pace and bounce, which will suit the England team. But it also suits the Australia team," he added.

"Put that into the melting pot and I can see exciting cricket coming."