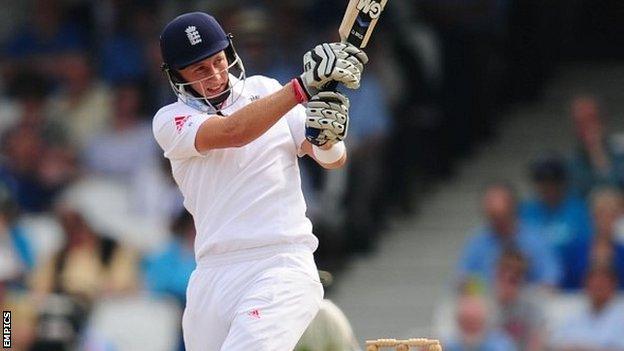 Yorkshire batsman Joe Root has been awarded a central contract by the England & Wales Cricket Board for 2013-14, with Eoin Morgan losing his.

Since his debut in December, Root has scored two Test centuries and helped England win the Ashes series 3-0.

One-day specialist Morgan has not played a Test since February 2012.

The contracts form part of a six-year deal with the players' union, which could give England players more time to play in the Indian Premier League.

England players have traditionally struggled to win lucrative IPL contracts because a clash with the domestic international season makes them unavailable for much of the competition.

"We will be handling that year by year but there is an understanding to try and minimise unnecessary overlap between our season and the IPL season," said Angus Porter, chief executive of the Professional Cricketers' Association (PCA). "We have agreed that (with the ECB) in principle."

Root was one of 11 players to receive contracts, with fast bowlers Steven Finn and Tim Bresnan also rewarded.

National selector Geoff Miller said: "Congratulations to Joe Root, who is the one addition to the list of players awarded a central contract.

"This reflects the important role Joe has played for England since making his international debut last year and will I'm sure continue to play across all formats."

Confirmation of the new contracts comes one day before England depart for Australia for the defence of the Ashes urn.

The ECB had originally intended to sign them off at the end of September, but were delayed by negotiations with the PCA.

In a joint statement, both parties confirmed they had reached an agreement on arrangements for England contracts for a period lasting until October 2019, to include four Ashes series and five ICC global events.

ECB managing director Hugh Morris said: "We are delighted to have concluded a six-year deal and to have all contractual issues resolved in advance of what we all hope to be another successful Ashes tour."

Porter added: "I am pleased that we have secured a fair and appropriate long-term agreement, and have done so via amicable and constructive dialogue."

Finn was dropped after a disappointing performance in the first Ashes Test in July, but kept his place for the one-day and T20 matches against Australia and is in the squad for the tour down under.

Yorkshire fast bowler Bresnan will also fly out with the squad to continue his rehabilitation from a stress fracture of the back and is hoping to play some part in the series.