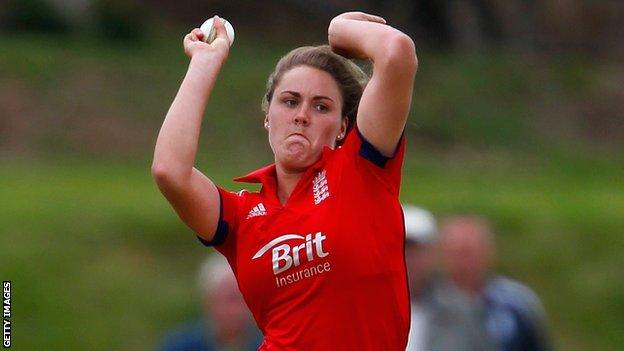 Natalie Sciver became the first England player to take a Twenty20 international hat-trick as they beat New Zealand by 19 runs in Barbados to book their place in the final of their T20 tri-series.

Danielle Wyatt top-scored with 37 as England made 125-8 batting first.

England will now face hosts West Indies in their last round-robin game on Thursday and again in Saturday's final.

Vice-captain Gunn led the side in the absence of skipper Charlotte Edwards, who was ruled out with a muscle strain.

With opener Bates anchoring the New Zealand innings, a close finish looked in prospect after she and Sophie Devine (25) had steered them to 74-1 in the 14th over when the latter fell to a return catch by Sciver.

The 21-year-old Surrey medium-pacer became only the fourth woman - and the first England player, female or male - to take a T20 international hat-trick by having Maddie Green caught by Holly Colvin, bowling Erin Bermingham and trapping Frances Mackay lbw off successive balls.

Fellow seamer Gunn then took three wickets in the last over to record her best bowling figures for England in any format.

With New Zealand already eliminated, Thursday's game will serve as a warm-up for the final, with England looking to bounce back after losing to the Windies by 11 runs earlier this week.