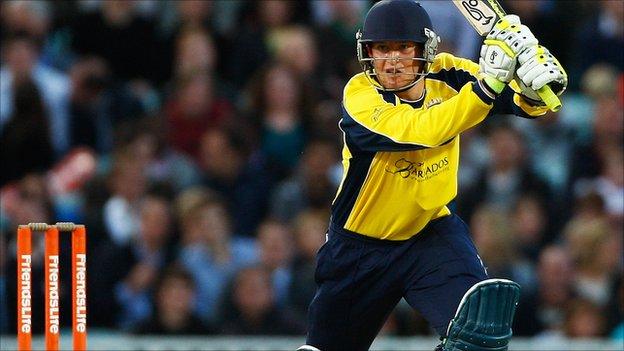 Hampshire all-rounder Liam Dawson hopes a successful three-week stint in the Dhaka Premier Division will help him earn a deal with a Bangladesh Premier League franchise next year.

Dawson will fly out to Bangladesh on Monday for three weeks to compete in the 50-over tournament for Prime Bank.

He will be joined by county team-mate and fellow all-rounder Sean Ervine.

"It's a strong competition, I'm looking forward to it," the 23-year-old told BBC Radio Solent.

Dawson, who passed 1,000 first-class runs in an English domestic season for the first time this summer, will join a Prime Bank team currently sixth in the table, with roughly half of the fixtures played.

"Ravi Bopara contacted me, saying his team wanted me to play, so that was nice. As soon as he said that, I spoke to a few people and managed to sort it out," explained Dawson.

"It's three weeks of competitive cricket. I'll be staying with Ravi, it's exciting times."

"I'm looking forward to it and it's a different challenge and somewhere I haven't played before."

Dhaka Premier Division games are 50-overs a side, but Dawson believes good performances will help land a deal in the Twenty20 BPL.

"I'm hoping to put my name in the shop window and hopefully secure a BPL deal and that's a big reason for me going," he added.

"It's something I've said I wanted to do and hopefully I can secure it."