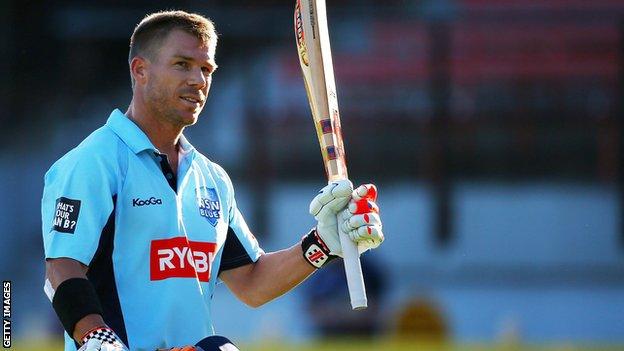 The New South Wales opener hit 20 fours and 10 sixes in making 197 off 144 balls in Thursday's win over Victoria in the Ryobi Cup 50-over competition.

He beat the previous domestic record of 187, scored by Jimmy Maher in 2004.

Warner, 26, has now scored three centuries in his past four matches ahead of the forthcoming Ashes series.

He was left out of his country's limited-overs squads for the current tour of India and his international career has been disrupted by a series of disciplinary offences.

Warner missed the first two Tests of this summer's Ashes in England after punching England batsman Joe Root at a Birmingham nightspot in the lead-up to the series.

That suspension came three weeks after a comments directed at two Australian journalists on Twitter led to a fine and strong criticism from national governing body Cricket Australia.

Warner, eventually caught on the boundary by Jon Holland off the bowling of John Hastings, has now accumulated 527 runs at an average of 75 in the provincial competition, which concludes with the final between New South Wales and Queensland on Sunday.

His total was still 71 runs short of the world record individual score for a one-day game, the 268 amassed by Ali Brown for Surrey against Glamorgan in 2002.