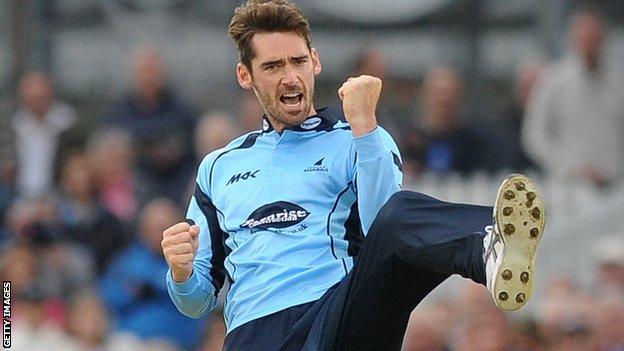 Sussex bowler Chris Liddle has signed a new two-year contract and will remain at Hove until the end of 2015.

The left-arm seamer joined the club in 2006 and has become an integral member of the side in both one-day formats.

"I've had a good last couple of seasons, particularly in Twenty20," the 29-year-old said.

"I'm determined to continue that form and help the team progress further. We want to be challenging for trophies every season in all formats."

Liddle was Sussex's leading wicket-taker in both the FLt20 and YB40, with 11 in the former and 19 in the 40-over competition, which changes to 50 overs a side next summer.

The former Leicestershire man had a spell with Bangladesh Premier League side Dhaka Gladiators earlier this year and Sussex cricket manager Mark Robinson described him as "one of the best one-day bowlers in the country".

Robinson added: "He is also very determined to break through into the four-day team. It is that type of hunger to improve and deliver that always excites the coaches".