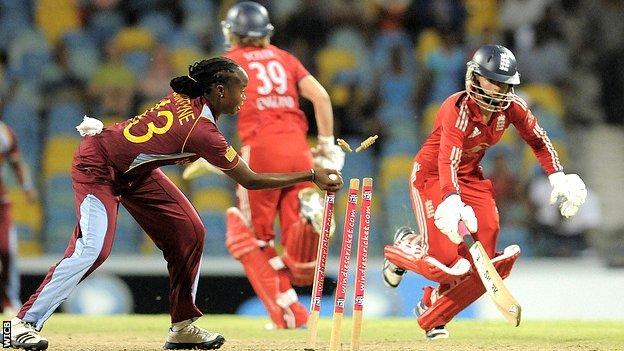 England women were beaten in a super-over eliminator by West Indies in the final group match of the triangular Twenty20 series in the Caribbean.

The two teams had already qualified for Saturday's final after securing two victories to New Zealand's one.

But in a dead rubber, West Indies made 118-7 after opting to bat, with England reaching exactly the same total.

After England made 6-1 in the one extra over, West Indies claimed victory with two fours from Deandra Dottin.

The super over was the first of the tournament in Bridgetown and saw West Indies top the table on 12 points after their third victory in four games.

Skipper Stafanie Taylor top-scored for her side in the main contest with 40 from 43 balls, having come to the crease midway through the fifth over, while Dottin added a four and two sixes in 26 from only 12 balls.

She was run out in the 17th over with 18 required from 16 balls, before Taylor removed acting England captain Jenny Gunn and Natalie Sciver in consecutive balls to restrict the tourists and take the game into the extra over.

England then lost Danielle Wyatt, who was run out second ball, as they set West Indies a target of seven for victory.

The hosts needed only one legitimate delivery to take the win as Gunn, who took 5-18 in the previous match against New Zealand, conceded a no-ball - which was hit for four - and another four.