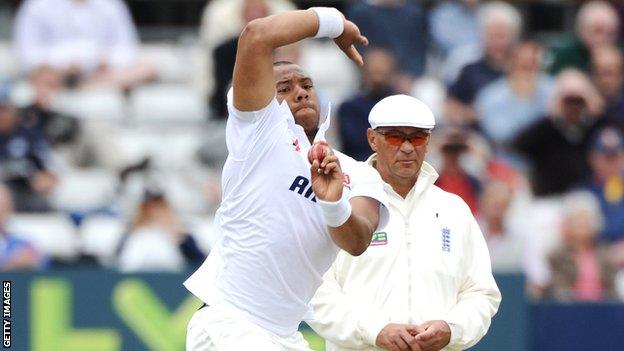 Left-arm seamers Tymal Mills and Harry Gurney will fly to Australia to provide practice for the England batsmen in the Ashes, which begins on 21 November.

Mills, 21, was due to travel down under for the England Performance Programme's winter tour but will now go on Sunday.

Australia have left-arm pace bowlers Mitchell Johnson and James Faulkner - but England have none in their squad.

Essex's Mills struck England spinner Graeme Swann on the forearm during a warm-up match for this summer's Ashes.

He consistently bowls at 90mph and there were initially concerns Swann had suffered a serious injury - but scans revealed nothing more than heavy bruising and he was able to play all five Tests against Australia, finishing as the leading wicket-taker with 26.

Gurney, 27, was Nottinghamshire's leading wicket-taker last season with 48 at a cost of 28.66 runs apiece, with a best of 5-81 against Somerset, and in June he took a hat-trick against Sussex at Hove.

In 2008 he dismissed then England captain Michael Vaughan and South Africa batsman Jacques Rudolph whilst playing for Leeds-Bradford University, and also played for Leicestershire before joining Nottinghamshire in 2011.

Johnson took 15 wickets in four Tests when England last visited Australia in 2010-11, including a match haul of 9-82 in a 267-run win for the home side in the third Test in Perth.

The Australians are in India for a seven-match one-day international series and both Johnson and Faulkner have taken five wickets in the four matches played so far.

Faulkner made his Test debut at The Oval in August and took 4-51 and 2-47 in a draw that secured England a 3-0 series win, their third successive triumphant Ashes campaign.

Mitchell Starc is a third left-arm quick bowler in the Australia ranks, but he could miss the Ashes because of a back injury.

England's first match of the tour starts on Thursday in Perth against a Western Australia XI.