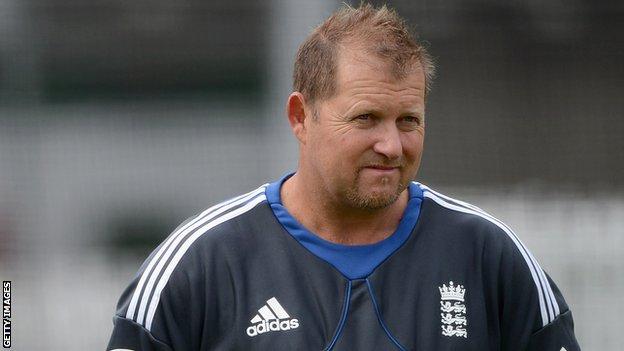 England bowling coach David Saker has agreed a new contract through to 2015.

His new contract was announced on the day England arrived in Perth for the start of their Ashes tour.

"David Saker has made - and continues to make - an enormous contribution to the success of the England team," said Hugh Morris, managing director of England Cricket.

Who is David Saker?

Saker is widely credited with helping establish James Anderson and Stuart Broad as two of the leading bowlers in international cricket.

His contract will take in two Ashes series, an World Twenty20 in Bangladesh and next year's World Cup, held in Australia and New Zealand.

Saker said: "I have been privileged enough to have been involved in some memorable moments for English cricket over the last three-and-a-half years and worked with some outstanding cricketers.

"Given the calibre of players in and around the side at the moment and the hunger and commitment from all involved, I am very much looking forward to another very exciting period over the next couple of years starting with the immediate challenge of retaining the Ashes."

Morris added that Saker played a key role in England's last two Ashes series triumphs - the 3-1 victory in Australia in 2010-11 and the 3-0 home win this summer.

"Since joining us in May 2010, he has worked with, and developed, an outstanding bowling unit, which has been key to winning two successive Ashes series, winning a global event and climbing to number one in the world," Morris said.

"His contribution has been such that we are aware that other countries would dearly have loved David to be a part of their management group and that is why this announcement is so important."