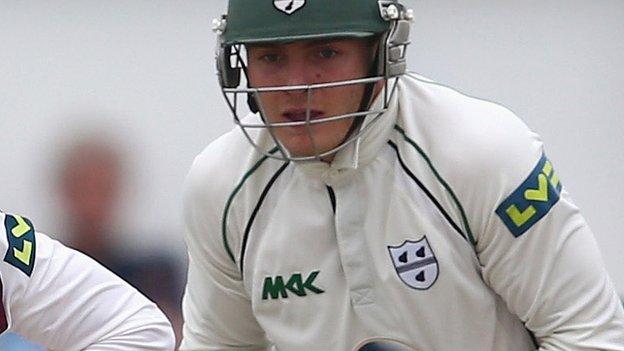 Worcestershire wicketkeeper Ben Cox has signed a new one-year deal to remain at New Road for the 2014 season.

Two of the county's youngsters, England Under-19 duo Ed Barnard and Joe Clarke, both 17, have penned two-year deals.

The pair, both of whom have played Minor Counties cricket for their native Shropshire in 2013, will start initially on summer scholarships.

"Both Ed and Joe have tremendous potential to make a big impact here at New Road," said coach Steve Rhodes.

"We can proudly say they are products of our academy system and are presently experiencing an England U19 batting camp in Sri Lanka.

"I am aware the England age group coaches also hold them both in high regard. They have bright futures ahead of them."

Shrewsbury-born Barnard, son of former Shropshire fast bowler Andy, was included in the England Under-19 squad in January, hitting an unbeaten 114 in the first Test against South Africa before then taking the match-winning catch.

Fellow Shropshire wicketkeeper batsman Clarke has scored over 600 runs for Wellington in the Birmingham League cricket this summer.

Both will progress to full contracts in 2015.

Cox, 21, was predominantly Worcestershire's first-choice keeper as a teenager in 2010, after making an eye-catching debut late in the previous season as a 17-year-old Bromsgrove schoolboy.

But Worcestershire brought in Ben Scott on loan from Middlesex to replace him in 2011, and again the following summer.

And they signed another keeper last winter, Australian Michael Johnson, who had first use of the gloves for the majority of this season, limiting Cox to six Championship appearances.